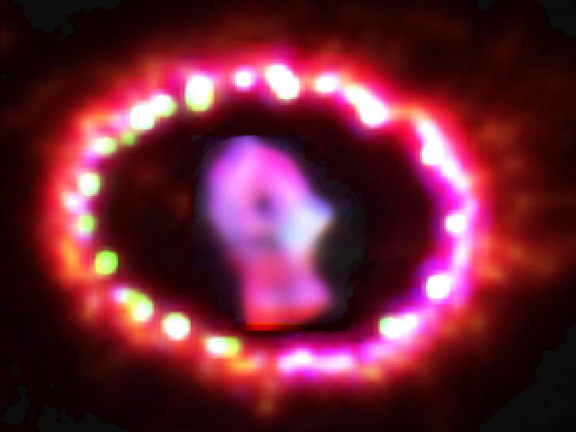 Using the Hubble Space Telescope, astronomers are witnessing the unprecedented transition of a supernova to a supernova remnant, where light from an exploding star in a neighboring galaxy, the Large Magellanic Cloud, reached Earth in February 1987. Named Supernova 1987A, it was the closest supernova explosion witnessed in almost 400 years. The supernova's close proximity to Earth allows astronomers to study it in detail as it evolves.

Now, the supernova debris, which has faded over the years, is brightening. This means that a different power source has begun to light the debris. The debris of SN 1987A is beginning to impact the surrounding ring, creating powerful shock waves that generate X-rays observed with NASA's Chandra X-ray Observatory.

Those X-rays are illuminating the supernova debris and shock heating is making it glow in visible light. Since its launch in 1990, the Hubble telescope has provided a continuous record of the changes in SN 1987A.