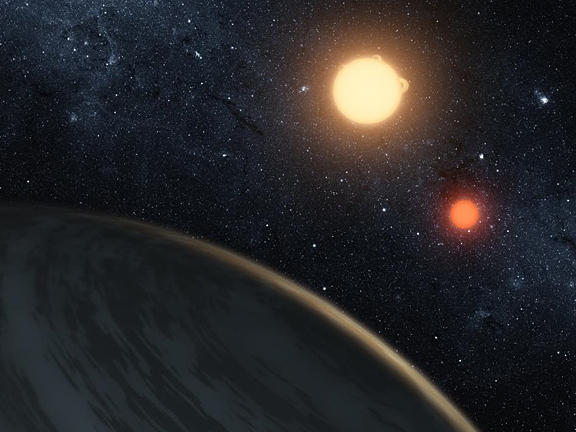 Although cold and gaseous rather than a desert world, the newfound planet Kepler-16b is still the closest astronomers have come to discovering Luke Skywalker's home world of Tatooine. Like Tatooine, Kepler-16b enjoys a double sunset as it circles a pair of stars approximately 200 light-years from Earth. It's not thought to harbor life, but its discovery demonstrates the diversity of planets in our galaxy.

"Kepler-16b is the first confirmed, unambiguous example of a circumbinary planet -- a planet orbiting not one, but two stars," said Josh Carter of the Harvard-Smithsonian Center for Astrophysics (CfA). "Once again, we're finding that our solar system is only one example of the variety of planetary systems Nature can create."

Carter is second author on the study announcing the discovery, which appears in the Sept. 15th issue of the journal Science. He is presenting the finding today at the Extreme Solar Systems II conference in Jackson Hole, Wyoming.

Kepler-16b weighs about a third as much as Jupiter and has a radius three-fourths that of Jupiter, making it similar to Saturn in both size and mass. It orbits its two parent stars every 229 days at a distance of 65 million miles -- similar to Venus' 225-day orbit.

Both stars are smaller and cooler than our Sun. As a result, Kepler-16b is quite cold, with a surface temperature of around -100 to -150 degrees Fahrenheit.

NASA's Kepler mission detected the planet through what is known as a planetary transit -- an event where a star dims when a planet crosses in front of it. The planet's discovery was complicated by the fact that the two stars in the system eclipse each other, causing the total brightness to dim periodically.

Astronomers noticed that the system's brightness sometimes dipped even when the stars were not eclipsing one another, hinting at a third body. The additional dimming events reappeared at irregular time intervals, indicating that the stars were in different positions in their orbit each time the third body passed. This showed that this third body was circling, not just one, but both stars.

Although Kepler data provided the relative sizes and masses of the stars and planet, astronomers needed more information to get absolute numbers. The crucial missing information came from the Tillinghast Reflector Echelle Spectrograph (TRES) on the 60-inch telescope at the Smithsonian Astrophysical Observatory's Whipple Observatory in Arizona.

TRES monitored the changing velocity of the primary star as it moved around in its orbit. This yielded an orbital solution that set the scale of the Kepler-16 system. The team found that the two stars orbit each other every 41 days at an average distance of 21 million miles.