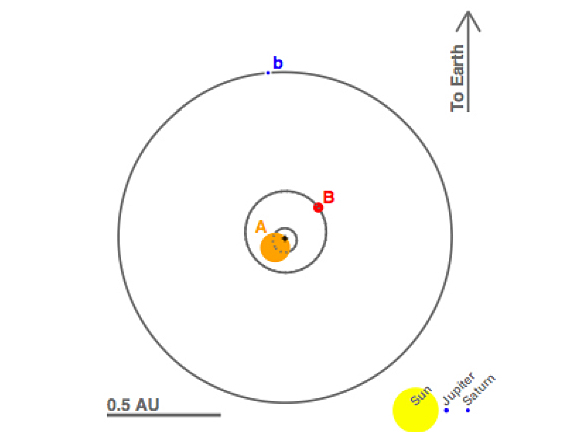 UC Santa Barbara astrophysicist Avi Shporer is part of the NASA team that has found the first known planet with two "suns," an idea popularized by the 1977 movie "Star Wars." The discovery is published this week in the journal Science.

In the iconic scene from "Star Wars," Luke Skywalker gazes into the distance as two suns set on the horizon. This type of planet is called a circumbinary planet, meaning it orbits a binary star system, as opposed to a single star like our Sun. Circumbinary planets have been pursued by astronomers for decades. Although some scientists have claimed to detect such a planet in the past, none of those claims have been widely accepted by the scientific community.

The Science article reports the first clear detection of a circumbinary planet. The system is called Kepler-16, and it is the 16th planetary system discovered by NASA's Kepler space telescope. It is located approximately 220 light-years from our Sun, near the constellation Cygnus, in the Milky Way galaxy.

"It is the combination of the unprecedented precision and the continuous observations from space that allowed the detection of Kepler-16," said Shporer, who is also a researcher with the UCSB-affiliated Las Cumbres Observatory Global Telescope Network (LCOGT) based in Goleta.

At first, the system was identified as an eclipsing binary star, a system of two stars orbiting each other and showing eclipses once every orbital period. Excitement within the Kepler team grew when the scientists were able to identify transits -- small, shallow eclipses induced by a small body such as a planet as it eclipses its parent stars. Further analysis confirmed that these transits are indeed induced by a planet in an orbit around both stars.

"This system is so fascinating since it is viewed edge-on, and all three bodies -- the two stars and the planet -- are all eclipsing each other," said Laurance Doyle of the Search for Extraterrestrial Intelligence (SETI) Institute, lead author of the Science paper.

Kepler is a NASA discovery-class mission designed to look for Earth-like planets orbiting Sun-like stars in their habitable zone. Kepler is looking for these planets by continuously monitoring the light intensity of over 150,000 stars simultaneously. Kepler's high sensitivity makes it capable of detecting the minute decrease in a star's light caused by a small planet crossing the line of sight to the star, thereby momentarily blocking a small fraction of the light coming from the star.

"The transits and mutual eclipses enable a detailed characterization of the system, including the mass and radius of all objects and their orbits," said Shporer.

The depth of an eclipse gives a sense of the size of the eclipsing body. In the case of Kepler-16, the exact timing of the eclipses is affected by the gravitational pull of the planet. Although the planet's mass is small relative to the two stars, it is able to slightly affect their orbit, making the stellar eclipses occur earlier or later, by up to a minute, compared to a constant period model. As for the planetary transits, analysis of Kepler's measurements is challenging because the timing of the transits deviates significantly from a constant period model, since each transit occurs at a different orbital phase of the inner star.

Ground-based observations are an important part of the Kepler project. "At LCOGT, we are using our telescopes as part of the large effort carried out by U.S. astronomers and others, to follow-up and accurately characterize the detections made by Kepler," said Tim Brown, scientific director of LCOGT and an adjunct professor of physics at UCSB. Brown is an important member of the Kepler team.

The Kepler-16 discovery is one of a series of discoveries made by Kepler since its launch in March 2009. Shporer said the most interesting ones are probably yet to come as Kepler continues to monitor the stars.