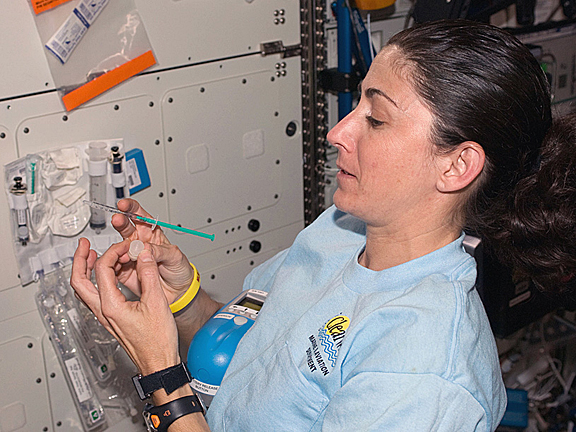 AMES, Iowa - Bob Lipert held up a syringe, attached a plastic cartridge and demonstrated how chemistry developed at Iowa State University is helping astronauts and cosmonauts make sure they have safe drinking water at the International Space Station.

Each cartridge contains a thin, one-centimeter disk that's loaded with chemistry, said Lipert, an associate scientist with Iowa State's Institute for Physical Research and Technology and an associate of the U.S. Department of Energy's Ames Laboratory. Run a 10-milliliter water sample through a disk and it will change color in the presence of iodine, which NASA uses to inhibit the growth of microorganisms in the drinking water stored at the space station. The disk will turn from white to yellow and, as it's exposed to higher concentrations of iodine, it will turn to orange and finally to a rust color.

A handheld device - a diffuse reflectance spectrometer - can read the disk's color changes and precisely measure the concentration of molecular iodine, or I. The whole process is called colorimetric solid phase extraction.

Disks loaded with different chemistry can also measure and record concentrations of silver, which the Russian Federal Space Agency uses as a biocide in its water supply at the space station. As silver concentrations increase, disks turn from yellow to purple. 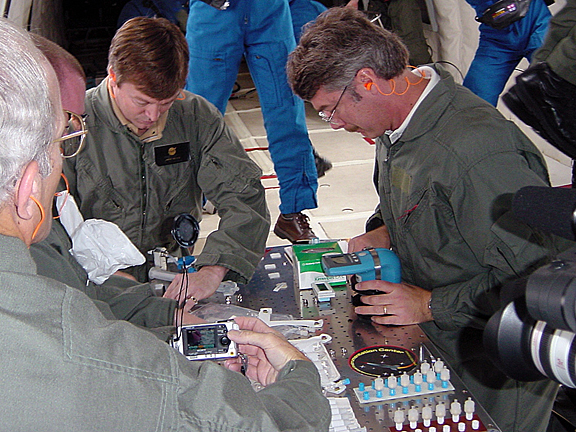 Iowa State's Bob Lipert, right, studies water-testing chemistry and equipment in the microgravity of a "vomit comet," an aircraft that climbs and falls to create weightlessness. Photo provided by Bob Lipert.

Before Iowa State chemists helped develop the new tests, the only way to test the space station's drinking water was to send samples back to earth.

The result is a quick, accurate test that doesn't use up much drinking water or much astronaut time.

"What's neat about what we came up with is that all the chemistry we need to do can be accomplished in about one minute per sample using a little, 1-centimeter cartridge," Lipert said.

It took some work to develop the test's chemistry and procedures. The NASA-sponsored project began more than a decade ago under the direction of Marc Porter, a former Iowa State professor of chemistry and chemical and biological engineering who is now a USTAR Professor at the University of Utah in Salt Lake City. Lipert has worked on the project since 2000.

Other Iowa State researchers who have worked on the project include Jim Fritz, Distinguished Professor Emeritus of Liberal Arts and Sciences; former post-doctoral researchers Matteo Arena and Neil Dias; and former graduate students April Hill, Daniel Gazda, John Nordling, Lisa Ponton and Cherry Shih. Lorraine Siperko, a research scientist at the University of Utah, has also worked on the project.

The university researchers have also collaborated with the Wyle Integrated Science and Engineering Group, a NASA subcontractor that helped develop and certify the water-testing hardware that has been deployed on the space station.

After a series of successful space tests in 2009 and '10, the researchers' water-testing equipment is now certified operational hardware and is part of the space station's environmental monitoring toolbox.

Lipert said the testing technology can also be a useful tool in many earthbound applications, including forensics tests for drugs, environmental tests for heavy metals and water quality tests for pesticides or herbicides.

"This is a very flexible platform," he said. "You just have to work out the chemistry for each substance you're analyzing."