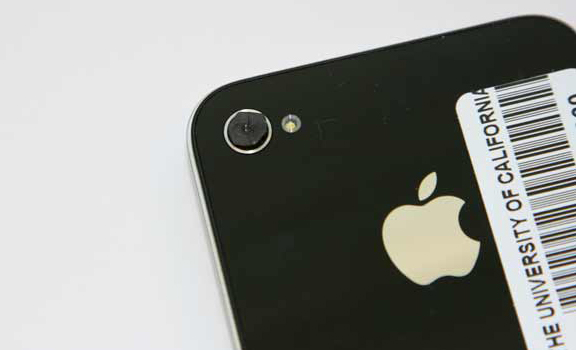 In a feat of technology tweaking that would rival MacGyver, a team of researchers from the University of California, Davis has transformed everyday iPhones into medical-quality imaging and chemical detection devices. With materials that cost about as much as a typical app, the decked-out smartphones are able to use their heightened senses to perform detailed microscopy and spectroscopy. The team will present their findings at the Optical Society's (OSA) Annual Meeting, Frontiers in Optics (FiO) 2011, taking place in San Jose, Calif. Oct. 16-20.

The enhanced iPhones could help doctors and nurses diagnose blood diseases in developing nations where many hospitals and rural clinics have limited or no access to laboratory equipment. In addition to bringing new sensing capabilities where they are needed most, the modified phones are also able transmit the real-time data to colleagues around the globe for further analysis and diagnosis.

"Field workers could put a blood sample on a slide, take a picture, and send it to specialists to analyze," says Sebastian Wachsmann-Hogiu, a physicist with UC Davis' Department of Pathology and Laboratory Medicine and the Center for Biophotonics, Science and Technology, and lead author of the research to be presented at FiO.

The group is not the first to build a smartphone microscope. "But we thought we could make something simpler and less expensive," Wachsmann-Hogiu says.

His first attempt took simplicity too far. "We started with a drop of water on the camera's lens," he says. "The water formed a meniscus, and its curved surface acted like a magnifying lens. It worked fine, but the water evaporated too fast."

Then the team turned to ball lenses. These are finely ground glass spheres that act as low-powered magnifying glasses. The team used a 1-millimeter-diameter ball lens that costs $30-40 USD in their prototype, but mass-produced lenses could be substituted to reduce the price.

To build the microscope's lens, Kaiqin Chu, a post-doctoral researcher in optics, inserted a ball lens into a hole in a rubber sheet, then simply taped the sheet over the smartphone's camera.

At 5x magnification, the ball lens is no more powerful than a child's magnifying glass. Yet when paired with the camera of a smartphone, the microscope could resolve features on the order of 1.5 microns, small enough to identify different types of blood cells.

There are two reasons why such low magnification produces such high-resolution images. First, ball lenses excel at gathering light, which determines resolution. Second, the camera's semiconductor sensor consists of millions of light-capturing cells. Each cell is only about 1.7 microns across. This is small enough to capture precisely the tiny high-resolution image that comes through the ball lens.

Ball lenses pose some unique problems. The curvature of their sphere bends light as it enters the ball, distorting the image, except for a very small spot in the center. The researchers used digital image processing software to correct for this distortion. They also used the software to stitch together overlapping photos of the tiny in-focus areas into a single image large enough for analysis.

Even though smartphone micrographs are not as sharp as those from laboratory microscopes, they are able to reveal important medical information, such as the reduced number and increased variation of cells in iron deficiency anemia, and the banana-shaped red blood cells characteristic of sickle cell anemia.

Wachsmann-Hogiu's team is working with UC Davis Medical Center to validate the device and determine how to use it in the field. They may also add features, such as larger lenses to diagnose skin diseases and software to count and classify blood cells automatically in order to provide instant feedback and perhaps recognize a wider range of diseases.

When researchers need additional diagnostic tools, the microscope could be swapped for a simple spectrometer that also uses light collected by the iPhone's camera.

Spectrometers smear out light from an object, separating it into its composite wavelengths in much the way a prism breaks up white light in the familiar colors of the rainbow. Since atoms and molecules absorb very specific wavelengths when exposed to light, it is possible to tease out the chemical signature of materials by studying their spectra. 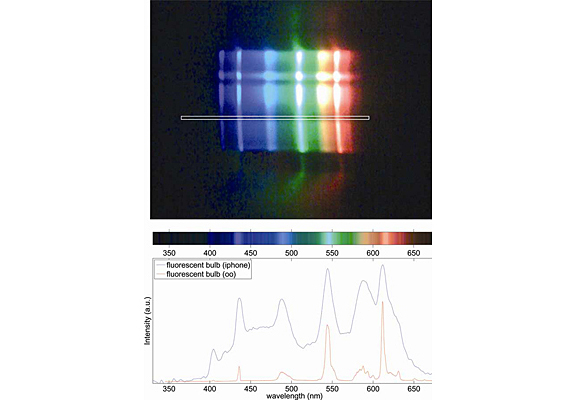 Spectral Uniformity - Above, the spectrum of a fluorescent bulb taken by an iPhone spectrometer. Below, a comparison of spectra from an iPhone and a commercial spectrometer manufactured by Ocean Optics. While the iPhone is not as precise as the commercial unit, it accurately picks up the peaks in color intensity. Credit: Z. J. Smith, K. Chu, A. R. Espenson, M. Rahimzadeh, A. Gryshuk, M. Molinaro, D. M. Dwyre, S. Lane, D. Matthews, S. Wachsmann-Hogiu.

Like the microscope, the iPhone's spectrometer takes advantage of smartphone imaging capabilities. "We had worked with spectrometers for diagnostics, and didn't think it would be too far a stretch," Wachsmann-Hogiu says.

The spectrometer that the researchers added to the iPhone is easy to build. It starts with a short plastic tube covered at both ends with black electrical tape. Narrow slits cut into the tape allow only roughly parallel beams of light from the sample to enter and exit the tube. It is this grating that smears, or spreads, the light into a spectrum of colors that scientists can use like a fingerprint to identify various molecules.

"If you didn't have the slits, light would come in from all different angles and you could never separate it properly," explains Zachary Smith, an optics post-doctoral researcher in the lab.

Though the spectrometer is still in its early stages, the researchers believe it could measure the amount of oxygen in the blood and help diagnose chemical markers of disease.

Because smartphone instruments are powerful and cheap, Wachsmann-Hogiu believes schools could use them to enrich science classes. Spectrometers could help illustrate lessons about light and energy. Microscopes could unveil an invisible world of sugar crystals, pollen grains, and microscopic organisms.

By intelligently exploiting smartphone features, Wachsmann-Hogiu's group promises to both save lives and illuminate science.

Uniting more than 130,000 professionals from 175 countries, the Optical Society (OSA) brings together the global optics community through its programs and initiatives. Since 1916 OSA has worked to advance the common interests of the field, providing educational resources to the scientists, engineers and business leaders who work in the field by promoting the science of light and the advanced technologies made possible by optics and photonics. OSA publications, events, technical groups and programs foster optics knowledge and scientific collaboration among all those with an interest in optics and photonics. For more information, visit www.osa.org.