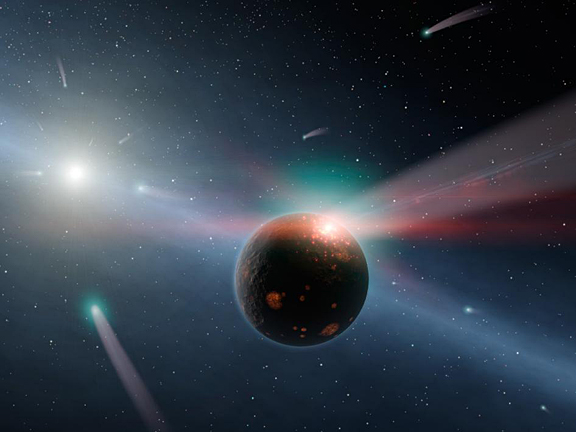 NASA's Spitzer Space Telescope has detected signs of icy bodies raining down in an alien solar system. The downpour resembles our own solar system several billion years ago during a period known as the "Late Heavy Bombardment," which may have brought water and other life-forming ingredients to Earth. Larger image (artist concept)

During this epoch, comets and other frosty objects flung from the outer solar system pummeled the inner planets. The barrage scarred our moon and produced large amounts of dust.

Now Spitzer has spotted a band of dust around a nearby bright star in the northern sky called Eta Corvi that strongly matches the contents of an obliterated giant comet. This dust is located close enough to Eta Corvi that Earth-like worlds could exist, suggesting a collision took place between a planet and one or more comets. The Eta Corvi system is approximately one billion years old, which researchers think is about the right age for such a hailstorm.

"We believe we have direct evidence for an ongoing Late Heavy Bombardment in the nearby star system Eta Corvi, occurring about the same time as in our solar system," said Carey Lisse, senior research scientist at the Johns Hopkins University Applied Physics Laboratory in Laurel, Md., and lead author of a paper detailing the findings. The findings will be published in the Astrophysical Journal. Lisse presented the results at the Signposts of Planets meeting at NASA's Goddard Space Flight Center in Greenbelt, Md., Oct. 19.

Astronomers used Spitzer's infrared detectors to analyze the light coming from the dust around Eta Corvi. Certain chemical fingerprints were observed, including water ice, organics, and rock, which indicate a giant comet source.

The light signature emitted by the dust around Eta Corvi also resembles the Almahata Sitta meteorite, which fell to Earth in fragments across Sudan in 2008. The similarities between the meteorite and the object obliterated in Eta Corvi imply a common birthplace in their respective solar systems.

A second, more massive ring of colder dust located at the far edge of the Eta Corvi system seems like the proper environment for a reservoir of cometary bodies. This bright ring, discovered in 2005, looms at about 150 times the distance from Eta Corvi as the Earth is from the sun. Our solar system has a similar region, known as the Kuiper Belt, where icy and rocky leftovers from planet formation linger. The new Spitzer data suggest that the Almahata Sitta meteorite may have originated in our own Kuiper Belt.

The resulting bombardment of comets lasted until 3.8 billion years ago. After comets impacted the side of the moon that faces Earth, magma seeped out of the lunar crust, eventually cooling into dark "seas," or maria. When viewed against the lighter surrounding areas of the lunar surface, those seas form the distinctive "Man in the Moon" visage. Comets also struck Earth or incinerated in the atmosphere, and are thought to have deposited water and carbon on our planet. This period of impacts might have helped life form by delivering its crucial ingredients.

"We think the Eta Corvi system should be studied in detail to learn more about the rain of impacting comets and other objects that may have started life on our own planet," Lisse said.

NASA's Jet Propulsion Laboratory in Pasadena, Calif., manages the Spitzer mission for the agency's Science Mission Directorate in Washington. Science operations are conducted at the Spitzer Science Center at the California Institute of Technology in Pasadena. Caltech manages JPL for NASA.