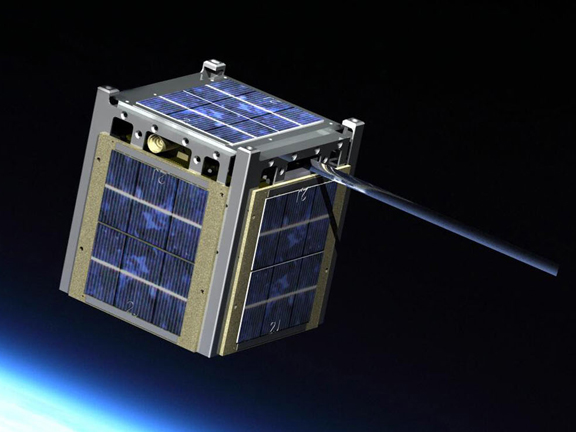 This is an artist's rendition of MSU's satellite orbiting the Earth. The satellite, called Explorer-1 [Prime], is scheduled to launch Oct. 28 on a NASA mission. (Image courtesy of MSU's Space Science and Engineering Laboratory).

BOZEMAN - The twin of a Montana State University student-built satellite that was launched in the spring but failed to reach orbit as a result of an anomaly with the TAURUS-XL rocket is scheduled to be launched Friday, Oct. 28, on another NASA rocket.

This miniature research satellite - also called Explorer-1 [Prime] in honor of the first successful U.S. satellite - is set to launch between 3:48 and 3:57 a.m. Mountain time on a Delta II rocket from the Vandenberg Air Force Base in Santa Maria, Calif. MSU students and faculty members plan to watch from the Air Force base, as well as from MSU's Space Operations Center in Cobleigh Hall, said Dave Klumpar, director of MSU's Space Science and Engineering Laboratory.

MSU's satellite will ride in a container with two other satellites, one from the University of Michigan and one from Auburn University, Klumpar said. All three satellites are aluminum cubes weighing no more than 2.2 pounds and measuring about four inches per side. That standardized size allows university-built satellites, called "CubeSats," to fit into an enclosed container called a P-POD.

"MSU's SSEL has the unique distinction of being the only university to fly a CubeSat on both of NASA's Educational Launch of Nanosatellite (ELaNa) missions," Klumpar said. "No other university in the world has flown university-built small satellites on two NASA orbital launches."

Also on the rocket will be a NASA satellite that represents a critical first step in building the next generation of U.S. polar-orbiting climate and weather monitoring spacecraft. The satellite is a bridge between NASA's Earth Observing System satellites and the upcoming Joint Polar Satellite Systems satellites.

If everything goes as planned, MSU's Explorer-1 [Prime] will roar into the morning sky sometime during the allotted nine-minute window. Almost two hours later, after the sun has recharged the satellite's batteries, the satellite will come alive over the south Atlantic near the bulge of Africa. An antenna that had been coiled inside the cube will spring out to transmit and receive signals.

The satellite was designed to emit a "heartbeat" every 15 seconds, Klumpar said. The signal will allow ham radio operators around the world to detect the satellite and report its progress to MSU. MSU students will monitor the satellite from campus, receiving their strongest signals around 11:45 a.m. and 11:45 p.m. daily for at least four months.

The Explorer-1 [Prime] will circle the Earth every 90 minutes in an "eccentric" orbit, which means that the orbit will be elliptical instead of circular, and the distance above Earth will be anywhere from 283 to 503 miles, Klumpar said.

The rocket carrying MSU's satellite is much larger than the TAURUS XL rocket that carried the first Explorer-1 [Prime], Klumpar said. That doesn't guarantee success, but Klumpar described the Delta II as a reliable workhorse. He said the Air Force, NASA and other agencies have used the rocket for at least three decades. A few mishaps have occurred, but the rocket has flown more than 100 times without incident.

"Knock on wood. Cross our fingers. It's still the rocket biz, but we are hopeful," Klumpar said. "We are very optimistic." 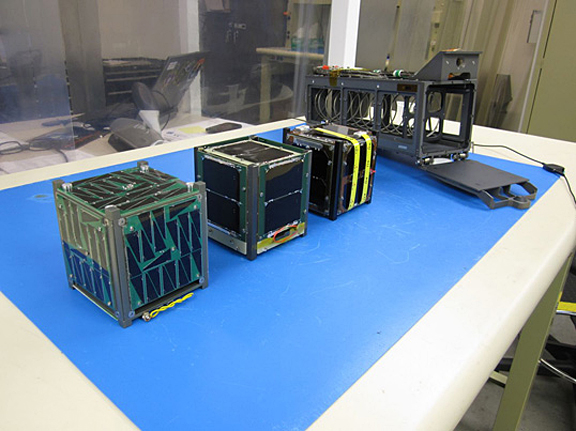 MSU's satellite sets between CubeSats from the University of Michigan and Auburn University. The three satellites will ride together in the P-POD container to the right. (Photo courtesy of Dave Klumpar).

The problem with the rocket carrying the first Explorer-1 [Prime] was that the fairing - a protective covering that works like a clamshell - failed to fall away. As a result, the rocket carried extra weight and couldn't accelerate fast enough to reach orbit. Although MSU's satellite was deployed from the rocket in space, at an altitude of more than 350 miles, the rocket had not reached sufficient velocity to achieve orbit. The rocket and all four satellites onboard ultimately crashed into the Antarctic Ocean or southern Pacific Ocean.

MSU's satellite was never recovered, but its twin was already built and scheduled for flight. Students in the SSEL commonly build spares and backups, Klumpar said.

"When we started working on the Explorer-1 [Prime] many years ago, it was always the case that we would build a second unit in parallel with the first one," Klumpar said. "It's useful because if the first one had gone into orbit and an anomaly or strange behaviors had come up, we would have been able to use the twin down here to get a feel for what was going on there."

In the past six months, the twin has gone through rigorous testing that "gives us confidence that it was as good as the first one," Klumpar said. The current Explorer-1 [Prime] has been in California since Aug. 25. It was stored in a clean room at San Luis Obispo and double-bagged with nitrogen to keep out dust and moisture. The satellite headed to the Air Force base on Oct. 15 to be bolted to the rocket.

MSU built the Explorer-1 [Prime] to replicate the scientific mission of the Explorer-1 mission which was launched on Jan. 31, 1958, and detected the existence of a band of energetic charged particles held in place by the Earth's magnetic field. The band was named the Van Allen Radiation Belt after the late James Van Allen, who directed the design and creation of instruments on Explorer-1.

Van Allen was head of the physics department when Klumpar was a master's degree student at the University of Iowa. Years later, Van Allen spoke at Klumpar's 40th high school class reunion, and Klumpar told him about MSU's project. Van Allen suggested naming the satellite the Explorer-1 [Prime]. He later sent Klumpar some Geiger Tube radiation detectors from the Pioneer 10 mission, the first mission to leave the solar system.

One of the detectors rode in the Explorer-1 [Prime] satellite last spring to measure the intensity and variability of the electrons in the Van Allen belts. The intense radiation in the belts can damage space-borne objects and pose a danger to astronauts, making it imperative to understand its variability.

Another tube from Van Allen will ride in the satellite's twin. The satellite will also carry solar cells for power, a radio receiver and transmitter, and a computer system to operate the entire device.

The satellite project is sponsored by the Montana Space Grant Consortium based at MSU. More than 125 undergraduate students have worked on the Explorer-1 [Prime] since the summer of 2006.

Dan Schwendtner, a former SSEL graduate research assistant and now a master's degree student in mechanical engineering, said he expected to watch the upcoming launch from Bozeman. He made the vacuum system that tested Explorer-1 [Prime] and said it was the first time that any SSEL satellite had been tested in an SSEL vacuum system.

"It was important for me," Schwendtner commented. "It was part of the culmination of four years of work."