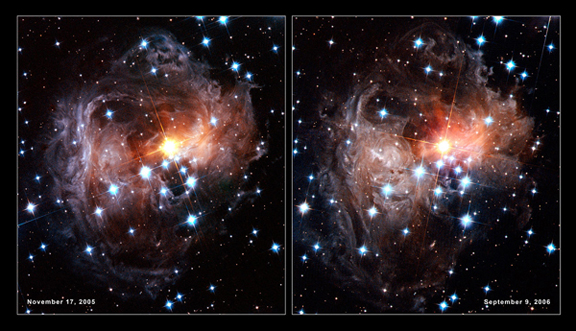 Fat doughnut-shaped dust shrouds that obscure about half of supermassive black holes could be the result of high speed crashes between planets and asteroids, according to a new theory from an international team of astronomers. The scientists, led by Dr. Sergei Nayakshin of the University of Leicester, publish their results in the journal Monthly Notices of the Royal Astronomical Society.

Supermassive black holes reside in the central parts of most galaxies. Observations indicate that about 50% of them are hidden from view by mysterious clouds of dust, the origin of which is not completely understood. The new theory is inspired by our own solar system, where the so-called zodiacal dust is known to originate from collisions between solid bodies such as asteroids and comets. The scientists propose that the central regions of galaxies contain not only black holes and stars but also planets and asteroids.

Collisions between these rocky objects would occur at colossal speeds as large as 1000 km per second, continuously shattering and fragmenting the objects, until eventually they end up as microscopic dust. Dr. Nayakshin points out that this harsh environment -- radiation and frequent collisions -- would make the planets orbiting supermassive black holes sterile, even before they are destroyed. "Too bad for life on these planets", he says, "but on the other hand the dust created in this way blocks much of the harmful radiation from reaching the rest of the host galaxy. This in turn may make it easier for life to prosper elsewhere in the rest of the central region of the galaxy."

He also believes that understanding the origin of the dust near black holes is important in our models of how these monsters grow and how exactly they affect their host galaxies. "We suspect that the supermassive black hole in our own galaxy, the Milky Way, expelled most of the gas that would otherwise turn into more stars and planets", he continues. "Understanding the origin of the dust in the inner regions of galaxies would take us one step closer to solving the mystery of the supermassive black holes".

Caption: "Light echo" of dust illuminated by a nearby star V838 Monocerotis as it became 600,000 times more luminous than our Sun in January 2002. The flash is believed to have been caused by a giant collision of some kind, e.g., between two stars or a star and a planet. Collisions of smaller objects, such as asteroids or minor planets near a supermassive black hole could also be dramatic due to the huge collision velocities and would release a lot of dust.

The new work is published in "Are SMBHs shrouded by "Super-Oort" clouds of comets and asteroids?", Nayakshin S., Sazonov S., Sunayev R., Monthly Notices of the Royal Astronomical Society, in press. Preprint: http://arxiv.org/abs/1109.1217

The Royal Astronomical Society (RAS, http://www.ras.org.uk), founded in 1820, encourages and promotes the study of astronomy, solar-system science, geophysics and closely related branches of science. The RAS organizes scientific meetings, publishes international research and review journals, recognizes outstanding achievements by the award of medals and prizes, maintains an extensive library, supports education through grants and outreach activities and represents UK astronomy nationally and internationally. Its more than 3500 members (Fellows), a third based overseas, include scientific researchers in universities, observatories and laboratories as well as historians of astronomy and others.

The University of Leicester (http://www2.le.ac.uk/about/facts) is a member of the 1994 Group of universities that shares a commitment to research excellence, high quality teaching and an outstanding student experience.