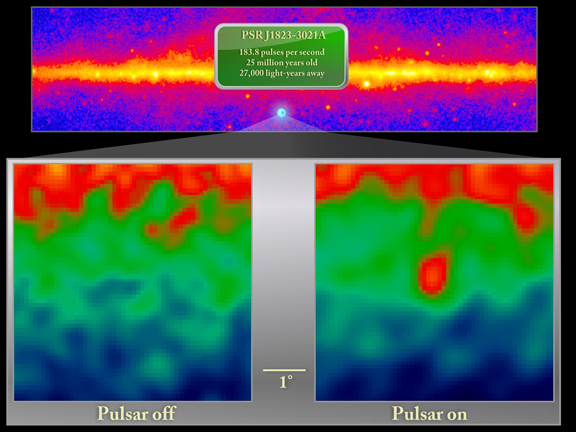 A pulsar is a type of neutron star that emits electromagnetic energy at periodic intervals. A neutron star is the closest thing to a black hole that astronomers can observe directly, crushing half a million times more mass than Earth into a sphere no larger than a city. This matter is so compressed that even a teaspoonful weighs as much as Mount Everest.

"With this new batch of pulsars, Fermi now has detected more than 100, which is an exciting milestone when you consider that, before Fermi's launch in 2008, only seven of them were known to emit gamma rays," said Pablo Saz Parkinson, an astrophysicist at the Santa Cruz Institute for Particle Physics at the University of California Santa Cruz, and a co-author on two papers detailing the findings.

One group of pulsars combines incredible density with extreme rotation. The fastest of these so-called millisecond pulsars whirls at 43,000 revolutions per minute.

Millisecond pulsars are thought to achieve such speeds because they are gravitationally bound in binary systems with normal stars. During part of their stellar lives, gas flows from the normal star to the pulsar. Over time, the impact of this falling gas gradually spins up the pulsar's rotation.

The strong magnetic fields and rapid rotation of pulsars cause them to emit powerful beams of energy, from radio waves to gamma rays. Because the star is transferring rotational energy to the pulsar, the pulsar's spin eventually slows as the star loses matter.

The object, named PSR J18233021A, lies within NGC 6624, a spherical collection of ancient stars called a globular cluster, one of about 160 similar objects that orbit our galaxy. The cluster is about 10 billion years old and lies about 27,000 light-years away toward the constellation Sagittarius.

Fermi's Large Area Telescope (LAT) showed that eleven globular clusters emit gamma rays, the cumulative emission of dozens of millisecond pulsars too faint for even Fermi to detect individually. But that's not the case for NGC 6624.

"It's amazing that all of the gamma rays we see from this cluster are coming from a single object. It must have formed recently based on how rapidly it's emitting energy. It's a bit like finding a screaming baby in a quiet retirement home," said Paulo Freire, the study's lead author, at the Max Planck Institute for Radio Astronomy in Bonn, Germany.

J18233021A was previously identified as a pulsar by its radio emission, yet of the nine new pulsars, none are millisecond pulsars, and only one was later found to emit radio waves.

Despite its sensitivity, Fermi's LAT may detect only one gamma ray for every 100,000 rotations of some of these faint pulsars. Yet new analysis techniques applied to the precise position and arrival time of photons collected by the LAT since 2008 were able to identify them.

"We adapted methods originally devised for studying gravitational waves to the problem of finding gamma-ray pulsars, and we were quickly rewarded," said Bruce Allen, director of the Max Planck Institute for Gravitational Physics in Hannover, Germany. Allen co-authored a paper on the discoveries that was published online today in The Astrophysical Journal.

Allen also directs the Einstein@Home project, a distributed computing effort that uses downtime on computers of volunteers to process astronomical data. In July, the project extended the search for gamma-ray pulsars to the general public by including Femi LAT data in the work processed by Einstein@Home users.

NASA's Fermi Gamma-ray Space Telescope is an astrophysics and particle physics partnership. It is managed by NASA's Goddard Space Flight Center in Greenbelt, Md. It was developed in collaboration with the U.S. Department of Energy, with important contributions from academic institutions and partners in France, Germany, Italy, Japan, Sweden and the United States.