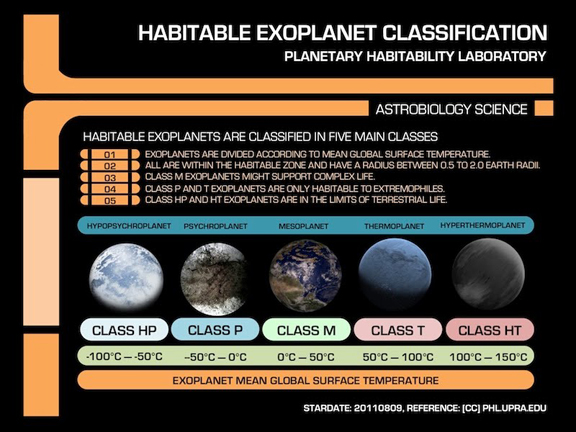 Scientists are now starting to identify potential habitable exoplanets after nearly twenty years of the detection of the first planets around other stars. Over 700 exoplanets have been detected and confirmed with thousands more still waiting further confirmation by missions such as NASA Kepler. Most of these are gas giants, similar to Jupiter and Neptune, but orbiting very dangerously close to their stars. Only a few have the right size and orbit to be considered suitable for any life.

Now the Planetary Habitability Laboratory (PHL) of the University of Puerto Rico at Arecibo (UPR Arecibo) presents a new assessment of the habitability of these worlds as part of its Habitable Exoplanets Catalog (HEC). The catalog not only identifies new potential habitable exoplanets, including exomoons like the Pandora world in the movie Avatar, but also ranks them according to various habitability indices.

"One important outcome of these rankings is the ability to compare exoplanets from best to worst candidates for life", says Abel Mendez, Director of the PHL and principal investigator of the project.

The catalog uses new habitability assessments like the Earth Similarity Index (ESI), the Habitable Zones Distance (HZD), the Global Primary Habitability (GPH), classification systems, and comparisons with Earth past and present. It also uses data from other databases, such as the Extrasolar Planets Encyclopaedia (http://www.exoplanet.eu), the Exoplanet Data Explorer (http://www.exoplanets.org), the NASA Kepler Mission (http://www.kepler.nasa.gov), and other sources.

According to Mendez, "New observations with ground and orbital observatories will discover thousands of exoplanets in the coming years. We expect that the analyses contained in our catalog will help to identify, organize, and compare the life potential of these discoveries."

The catalog lists and categorizes exoplanets discoveries using various classification systems, including tables of planetary and stellar properties. One of the classifications divides them into eighteen mass and thermal categories, creating a table similar to a periodic table for exoplanets. Additional resources of the catalog will include scientific visualizations and stellar maps of exoplanets. Various undergraduate students participated in the project.

Only two confirmed exoplanets so far match the criteria for habitability in the catalog, Gliese 581d and HD 85512b, both still marginally Earth-like. However, the catalog identifies over 15 exoplanets and 30 exomoons as potential habitable candidates. Future observations with new instruments, such as the proposed NASA Terrestrial Planet Finder (TPF), will be necessary to confirm the suitability for life of any of these candidates.

"I hope this database will help increase interest in building a big space-based telescope to observe exoplanets directly and look for possible signatures of life," says Jim Kasting, an expert on planetary habitability science from Penn State.

The catalog is available now online at the PHL website phl.upr.edu. A poster will be presented at the Kepler Science Conference from December 5th to 9th, 2011 in NASA Ames, Moffet Field, California.

The PHL is a research and educational virtual laboratory dedicated to studies of the habitability of Earth, the Solar System, and exoplanets. The PHL is managed by the UPR Arecibo with the international collaboration of scientists from various institutions including NASA and SETI.