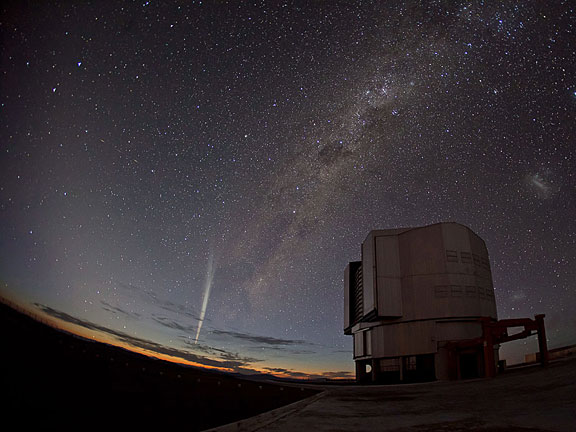 The recently discovered Comet Lovejoy has been captured in stunning photos and time-lapse video taken from ESO's Paranal Observatory in Chile. The comet graced the southern sky after it had unexpectedly survived a close encounter with the Sun.

A new time-lapse video sequence was taken by Gabriel Brammer from ESO less than two days ago on 22 December 2011. Gabriel was finishing his shift as support astronomer at the Paranal Observatory when Comet Lovejoy rose over the horizon just before dawn.

In the words of Gabriel Brammer himself: "On the last morning of my shift I tried to try catch it on camera before sunrise. The tail of the comet was easily visible with the naked eye, and the combination of the crescent Moon, comet, Milky Way and the laser guide star was nearly as impressive to the naked eye as it appears in the long-exposure photos."

The sequence also features the pencil-thin beam of the VLT's Laser Guide Star set against the beautiful backdrop of the Milky Way, as astronomers conduct their last observations for the night.

ESO optician Guillaume Blanchard made a marvelous wide-angle photo of Comet Lovejoy and ESO Photo Ambassador Yuri Beletsky, captured the spectacle from Santiago de Chile. Blanchard said: "For me this comet is a Christmas present to the people who will stay at Paranal over Christmas".

This bright comet was also seen from the International Space Station in another stunning time-lapse sequence on 21 December as the crew filmed lightning on the Earth's night side.

Comet Lovejoy has been the talk of the astronomy community over the past few weeks. It was discovered on 27 November by the Australian amateur astronomer Terry Lovejoy and was classified as a Kreutz sungrazer, with its orbit taking it very close to the Sun [1]. Just last week, the comet entered the Sun's corona, a much-anticipated event, passing a mere 140,000 kilometers from the Sun's surface. A close shave indeed....

The comet was expected to break up and vaporize, but instead it survived its steaming hot encounter with the Sun and re-emerged a few days later, much to everyone's surprise. It is now visible from the southern hemisphere, appearing at dawn, and features a bright tail millions of kilometers long, composed of dust particles that are being blown ahead of the comet by the solar wind.

Lovejoy will now continue in its highly eccentric orbit around the Sun and once again disappear into the distant Solar System. It would be interesting to know if it will actually survive to re-appear in our skies in 314 years as predicted.

With this spectacular sequence of the 2011 Christmas Comet Lovejoy, ESO would like to wish everyone a Merry Christmas and a Happy New Year.

[1] Kreutz sungrazers are members of a family of comets thought to come from the break up of one single large comet in the 12th century, and which now orbit the Sun along the same path.

The year 2012 marks the 50th anniversary of the founding of the European Southern Observatory (ESO). ESO is the foremost intergovernmental astronomy organization in Europe and the world's most productive astronomical observatory. It is supported by 15 countries: Austria, Belgium, Brazil, the Czech Republic, Denmark, France, Finland, Germany, Italy, the Netherlands, Portugal, Spain, Sweden, Switzerland and the United Kingdom. ESO carries out an ambitious program focused on the design, construction and operation of powerful ground-based observing facilities enabling astronomers to make important scientific discoveries. ESO also plays a leading role in promoting and organizing cooperation in astronomical research. ESO operates three unique world-class observing sites in Chile: La Silla, Paranal and Chajnantor. At Paranal, ESO operates the Very Large Telescope, the world's most advanced visible-light astronomical observatory and two survey telescopes. VISTA works in the infrared and is the world's largest survey telescope and the VLT Survey Telescope is the largest telescope designed to exclusively survey the skies in visible light. ESO is the European partner of a revolutionary astronomical telescope ALMA, the largest astronomical project in existence. ESO is currently planning a 40-meter-class European Extremely Large optical/near-infrared Telescope, the E-ELT, which will become "the world's biggest eye on the sky".