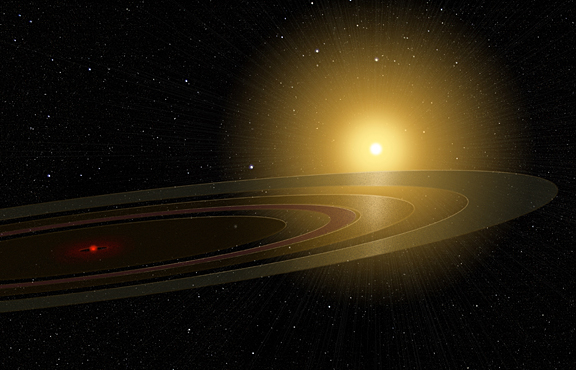 A team of astrophysicists from the University of Rochester and Europe has discovered a ring system in the constellation Centaurus that invites comparisons to Saturn.

The scientists, led by Assistant Professor of Physics and Astronomy Eric Mamajek of Rochester and the Cerro Tololo Inter-American Observatory, used data from the international SuperWASP (Wide Angle Search for Planets) and All Sky Automated Survey (ASAS) project to study the light curves of young Sun-like stars in the Scorpius-Centaurus association -- the nearest region of recent massive star formation to the Sun.

The basic concept of the research is straightforward. Imagine yourself sitting in a park on a sunny afternoon and a softball passes between you and the Sun. The intensity of light from the Sun would appear to weaken for just a moment. Then a bird then flies by, causing the intensity of the sunlight to again weaken -- more or less than it did for the baseball, depending on the size of the bird and how long it took to pass. That's the principle that allowed the researchers to discover a cosmic ring system.

A light curve is a graph of light intensity over time, and one star in particular showed dramatic changes during a 54 day period in early 2007. University of Rochester graduate student Mark Pecaut and Mamajek discovered the unusual eclipse in December 2010. "When I first saw the light curve, I knew we had found a very weird and unique object. After we ruled out the eclipse being due to a spherical star or a circumstellar disk passing in front of the star, I realized that the only plausible explanation was some sort of dust ring system orbiting a smaller companion -- basically a 'Saturn on steroids,'" said Mamajek.

If a spherical object merely passed in front of the star, the intensity of the light would gradually dim and reach a low point before gradually increasing. That was not the case with the star identified as 1SWASP J140747.93-394542.6. The Rochester team discovered a long, deep, and complex eclipse event with significant on-and-off dimming. At the deepest parts of the eclipse, at least 95% of the light from the star was being blocked by dust.

The shape of the light curve was very similar to that of a well-researched star (EE Cephei), suggesting similar traits in the companion objects. However EE Cephei differs in that it appears to be a thick protoplanetary disk transiting -- or passing -- in front a massive, hot star. "We suspect this new star is being eclipsed by a low-mass object with an orbiting disk that has multiple thin rings of dust debris," said Mamajek. The star is similar in mass to the Sun, but is much younger -- about 16 million years old or 1/300th the age of the solar system -- and it lies about 420 light-years away.

The research was conducted by Mamajek, Associate Professor Alice Quillen, graduate student Mark Pecaut, graduate student Fred Moolekamp, and graduate student Erin Scott of Rochester; Assistant Professor Matthew Kenworthy of Leiden University in The Netherlands; and Professor Andrew Collier Cameron and postdoctoral research assistant Neil Parley of the University of St. Andrews in Scotland. Their findings will be published in an upcoming issue of the Astronomical Journal.

"This marks the first time astronomers have detected an extrasolar ring system transiting a Sun-like star, and the first system of discrete, thin, dust rings detected around a very low-mass object outside of our solar system," said Mamajek, "But many questions remain about what exactly has been discovered." He says the object at the center of the ring system is either a very low-mass star, brown dwarf, or planet. The answer lies in the object's mass.

In order to be a brown dwarf, the object would have to be between 13 MJ (Jupiter masses) and 75 MJ, insufficient to sustain the thermonuclear fusion reactions during its projected lifetime. If the object's mass is less than 13 MJ, it would likely be a planet, making it similar to Saturn whose rings have a similar optical depth.

Mamajek and colleagues will be proposing to use southern hemisphere telescopes to obtain radial velocity data for the star to detect the gravitational tug of the companion, and conduct non-redundant mask imaging experiments to try to detect light from the faint companion. The observations will help calculate the companion's mass, which, in turn, will help determine its identity.

Along with the central object, Mamajek is interested in what is taking place in the two pronounced gaps located between the rings. Gaps usually indicate the presence of objects with enough mass to gravitationally sculpt the ring edges, and Mamajek thinks his team could be either observing the late stages of planet formation if the transiting object is a star or brown dwarf, or possibly moon formation if the transiting object is a giant planet.

If the dusty rings are similar to Saturn's in terms of their mass per optical depth, then the total mass of the rings is only on the order of the mass of Earth's moon. The orbital radius of the outermost ring is tens of millions of kilometers, so the mass and size of the ring systems is substantially heftier than Saturn's ring system. In the discovery paper, the four rings detected thus far have been dubbed "Rochester", "Sutherland", "Campanas", and "Tololo" after the sites where the eclipsed star was first detected and analyzed.

With several questions still to answer, Mamajek considers the paper to be a progress report. He expects it will take at least a couple more years to piece everything together. However with future all-sky monitoring surveys like the proposed Large Synoptic Survey Telescope being built in Chile, Mamajek expects that rare eclipses of young stars by moon-forming disks and large ring systems around young giant planets will be detectable over many years of searching. "Follow up observations of such eclipses may provide our first observational constraints on the formation and early evolution of moons around gas giant planets."