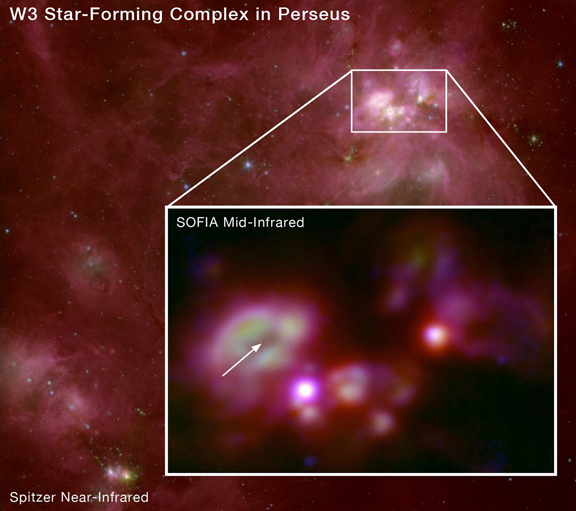 NASA's Stratospheric Observatory for Infrared Astronomy (SOFIA) researchers have captured new images of a recently born cluster of massive stars named W3A. The cluster is seen lurking in the depths of the large gas and dust cloud from which it formed.

The larger image shows the overall structure of the W3 region, lying 6,400 light years away in the direction of the constellation Perseus, as seen at near-infrared wavelengths by the Spitzer Space Telescope. The inset image composed of data obtained by SOFIA at mid-infrared wavelengths zooms in on the violent interaction zone around the massive star cluster.

The energetic radiation and strong winds from these stars will eventually shred and disperse their birth cloud, possibly triggering the formation of more stars in adjacent clouds. Astronomers using SOFIA aim to better understand the effects the largest stars in the cloud have on their smaller siblings and on the cycle of star birth.

The SOFIA observations reveal the presence of some 15 massive stars in various stages of their birth process. Toward the left of the inset image, a small bubble (arrow) has been cleared out of the gas and dust by the most massive star in this cluster. This bubble is surrounded by a dense shell (green) of material in which some of the dust and all of the large molecules have been destroyed. That shell is surrounded by mostly untouched cloud material, traced by the red emission from cooler dust. Astronomers have evidence that the expansion of such bubbles around massive newly born stars acts to compress nearby material and trigger the condensation of more stars.

Most stars in the Milky Way, including our sun, are thought to have formed in such violent environments. The processes involved are difficult to follow because light produced by these hot stars at visual and ultraviolet wavelengths can't escape the surrounding clouds of interstellar material. Short-wavelength starlight absorbed by small dust grains and large molecules sets these clouds aglow at the longer infrared wavelengths observed by SOFIA, allowing astronomers to peer inside the clouds and study the internal structures and processes.

The SOFIA observations were made using the FORCAST instrument (Faint Object Infrared Camera for the SOFIA Telescope; Principal Investigator Terry Herter, Cornell University). The data were analyzed and interpreted by the FORCAST team with Francisco Salgado and Alexander Tielens of the Leiden (Netherlands) Observatory plus SOFIA staff scientist James De Buizer. These data are subjects of papers presented at the 219th American Astronomical Society meeting in Austin, Texas, and papers submitted for publication in The Astrophysical Journal.

SOFIA is a Boeing 747SP aircraft extensively modified to carry a 17-ton reflecting telescope with an effective diameter of 2.5 meters (100 inches) to altitudes as high as 45,000 feet (14 km), above more than 99 percent of the water vapor in Earth's atmosphere that blocks most infrared radiation from celestial sources. SOFIA is a joint project of NASA and the German Aerospace Center (DLR), and is based and managed at NASA's Dryden Aircraft Operations Facility in Palmdale, Calif. NASA's Ames Research Center in Moffett Field, Calif., manages the SOFIA science and mission operations in cooperation with the Universities Space Research Association (USRA), headquartered in Columbia, Md., and the German SOFIA Institute (DSI) at the University of Stuttgart.