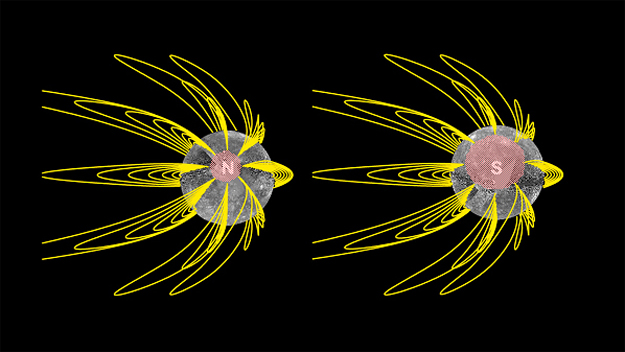 Illustrative magnetic lines of force (yellow lines) for two views of Mercury. The polar region (red shading) within which the local magnetic field opens to the solar wind, and is not connected to the opposite hemisphere of the planet, is four times larger in the south (S) than in the north (N). The magnetic field offset strongly enhances the exposure of the surface at high southern latitudes to bombardment by charged particles in the solar wind.

One of the major discoveries of the Mariner 10 flybys in 1974-75 was that Mercury possesses an internal magnetic field, one with a surface strength about 1% of Earth's field. This discovery was a surprise to many, because magnetic fields in Earth-like planets are thought to be generated by convective motions in a fluid metallic core. Thermal history models for Mercury, the smallest of the terrestrial planets, however, predicted that a pure iron core would have long since cooled to the point that the entire core should now be solid. Moreover, neither Venus nor Mars has a global magnetic field.

This discovery raised two questions: First, why does Mercury have a global magnetic field? And second, why is the field so much weaker than Earth's field? Over the past several decades, a number of innovative hypotheses have been proposed to account for Mercury's field. These hypotheses make different predictions about detailed aspects of field geometry, details that could not be resolved from the Mariner 10 data. Determining the structure of Mercury's internal magnetic field was therefore a high priority for MESSENGER.

The MESSENGER flybys of Mercury in 2008 and 2009 confirmed the Mariner 10 results and further demonstrated that the planetary magnetic dipole (equivalent to a giant bar magnet) is aligned with the planet's spin axis to within 5*. But little additional information could be ascertained because of the limited coverage afforded by the flyby trajectories. So, as MESSENGER entered orbit about Mercury, a key objective was to determine the global structure of Mercury's magnetic field as accurately as possible.

If interplanetary space were a true vacuum, accomplishing this task would be easy. However, Mercury's field constantly interacts with the interplanetary magnetic field (IMF) and the charged particles of the solar wind. The solar wind and the IMF distort the magnetic field near Mercury into a shape that resembles that of a windsock. Moreover, the transport of charged particles near Mercury generates electric currents and additional magnetic fields that can be comparable in amplitude to the internal magnetic field. These complications pose major challenges to deducing the geometry of the planet's internal field.

The magnetic field can be broken down into three components in cylindrical coordinates, where the axis of the cylinder coincides with the axis of Mercury's magnetic dipole moment. In these coordinates, at the magnetic equator the radial component of the field, B, vanishes (Figure 1). By identifying the point along each orbit at which B = 0, the position of the magnetic equator can be mapped as a function of planetary longitude. These measurements indicate where the magnetic equator is offset (measured by the distance Z0), and whether it is tilted, from the planet's geographic equator. The point of "zero inclination," at which the field is parallel to the surface of the planet, provides another common definition of magnetic equator, but as illustrated in Figure 1 this alternate definition does not reliably yield the displacement of the internal magnetic dipole from the geographic equator.

Multiple measurements of Z0 as a function of magnetic local time (i.e., solar local time at Mercury) and planetary longitude are shown in Figure 2, color-coded by the value of the sunward component, BX-MSO, of the magnetic field in the solar wind. What stands out clearly from the figure is that the magnetic equator is not centered on Z0 = 0 but instead is offset systematically to the north (the positive direction). The average value of Z0 is +480 km, nearly 20% of Mercury's radius of 2440 km. This offset of Mercury's internal magnetic dipole might depend on magnetic local time, and is perhaps slightly larger near noon, but it is not clearly ordered by planetary longitude. The magnetic field is thus dominated by this dipole offset, and any more detailed structure in the field is fairly subtle. None of the models proposed to date to explain Mercury's magnetic field, however, predicted such a large northward offset. Theorists are therefore busy devising new models to understand Mercury and its puzzling magnetic field.

The offset magnetic dipole may affect Mercury's surface and exosphere (the thin, transient atmosphere of the planet), because the magnetic field at the surface should be more than 3.4 times stronger at high northern latitudes than at comparable southern latitudes. Moreover, the area of Mercury's surface with magnetic field lines that are open to interplanetary space is approximately 4 times larger in the south than in the north. These two factors suggest that the influx of solar wind particles will be much stronger in the south. Such a greater surface influx of energetic electrons and ions should increase the rate of space weathering, which darkens the surface, and the generation of exospheric atoms by ion bombardment. Careful observations of the exosphere and the average reflectance of the surface may reveal such hemispherical differences.

Mercury isn't the only planet with an offset dipole. Saturn also has a dipole that is aligned with the spin axis and offset from the planet center. However, relative to the planet's diameter, Mercury's dipole offset is a factor of 5 larger than that of Saturn. Although a mechanism for producing the geometry of Saturn's magnetic field has been proposed, Saturn is a gas giant planet, and its magnetic-field-generating processes differ from those of Mercury (and Earth). It remains to be seen whether a mechanism similar to that proposed for Saturn might operate in Mercury's fluid iron-rich outer core. The MESSENGER team is collecting as much magnetic field data as possible in a search for small telltale signatures that could prove key in discovering the inner workings of the dynamo that produces Mercury's magnetic field.

One curiosity already stands out. As may be seen in Figure 2, there does not seem to be any consistent dependence of the offset of the magnetic equator on the sign of the sunward component of the IMF. That is, the blue and red points on the figure do not have systematically different offsets but instead largely overlap. Simulations of Mercury's interaction with the solar wind, in contrast, predict that the sunward component of the interplanetary magnetic field, BX, should shift the nighttime offset northward for BX < 0 and southward for BX > 0. That this effect has not been seen is still a puzzle. Evidently, Mercury has much to teach us about the inner workings of planets and the dynamics of the interplay between planetary magnetic fields and the solar wind.