Salty soil can suck water out of atmosphere: Could it happen on Mars? 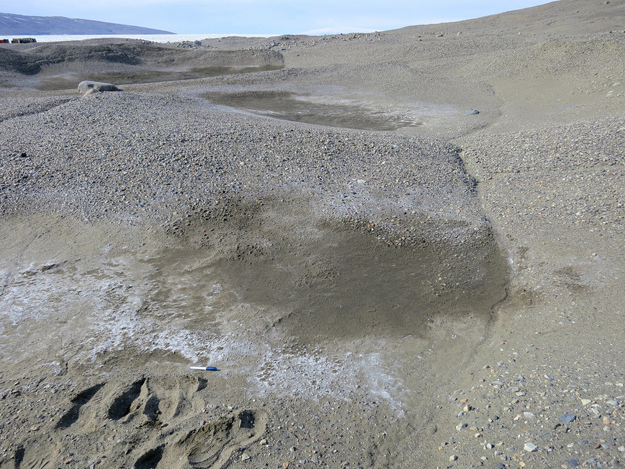 The frigid McMurdo Dry Valleys in Antarctica are a cold, polar desert, yet the sandy soils there are frequently dotted with moist patches in the spring despite a lack of snowmelt and no possibility of rain.

A new study, led by an Oregon State University geologist, has found that that the salty soils in the region actually suck moisture out of the atmosphere, raising the possibility that such a process could take place on Mars or on other planets.

The study, which was supported by the National Science Foundation, has been published online this week in the journal Geophysical Research Letters, and will appear in a forthcoming printed edition.

Joseph Levy, a post-doctoral researcher in OSU's College of Earth, Ocean, and Atmospheric Sciences, said it takes a combination of the right kinds of salts and sufficient humidity to make the process work. But those ingredients are present on Mars and, in fact, in many desert areas on Earth, he pointed out.

"The soils in the area have a fair amount of salt from sea spray and from ancient fjords that flooded the region," said Levy, who earned his doctorate at Brown University. "Salts from snowflakes also settle into the valleys and can form areas of very salty soil. With the right kinds of salts, and enough humidity, those salty soils suck the water right out of the air.

"If you have sodium chloride, or table salt, you may need a day with 75 percent humidity to make it work," he added. "But if you have calcium chloride, even on a frigid day, you only need a humidity level above 35 percent to trigger the response."

Once a brine forms by sucking water vapor out of the air, Levy said, the brine will keep collecting water vapor until it equalizes with the atmosphere.

"It's kind of like a siphon made from salt."

Levy and his colleagues, from Portland State University and Ohio State University, found that the wet soils created by this phenomenon were 3-5 times more water-rich than surrounding soils - and they were also full of organic matter, including microbes, enhancing the potential for life on Mars. The elevated salt content also depresses the freezing temperature of the groundwater, which continues to draw moisture out of the air when other wet areas in the valleys begin to freeze in the winter.

Though Mars, in general, has lower humidity than most places on Earth, studies have shown that it is sufficient to reach the thresholds that Levy and his colleagues have documented. The salty soils also are present on the Red Planet, which makes the upcoming landing of the Mars Science Laboratory this summer even more tantalizing.

Levy said the science team discovered the process as part of "walking around geology" - a result of observing the mysterious patches of wet soil in Antarctica, and then exploring their causes. Through soil excavations and other studies, they eliminated the possibility of groundwater, snow melt, and glacial runoff. Then they began investigating the salty properties of the soil, and discovered that the McMurdo Dry Valleys weather stations had reported several days of high humidity earlier in the spring, leading them to their discovery of the vapor transfer.

"It seems kind of odd, but it really works," Levy said. "Before one of our trips, I put a bowl of the dried, salty soil and a jar of water into a sealed Tupperware container and left it on my shelf. When I came back, the water had transferred from the jar to the salt and created brine.

"I knew it would work," he added with a laugh, "but somehow it still surprised me that it did."

Evidence of the salty nature of the McMurdo Dry Valleys is everywhere, Levy said. Salts are found in the soils, along seasonal streams, and even under glaciers. Don Juan Pond, the saltiest body of water on Earth, is found in Wright Valley, the valley adjacent to the wet patch study area.

"The conditions for creating this new water source into the permafrost are perfect," Levy said, "but this isn't the only place where this could or does happen. It takes an arid region to create the salty soils, and enough humidity to make the transference work, but the rest of it is just physics and chemistry."

About the OSU College of Earth, Ocean, and Atmospheric Sciences: CEOAS is internationally recognized for its faculty, research and facilities, including state-of-the-art computing infrastructure to support real-time ocean/atmosphere observation and prediction. The college is a leader in the study of the Earth as an integrated system, providing scientific understanding to address complex environmental challenges