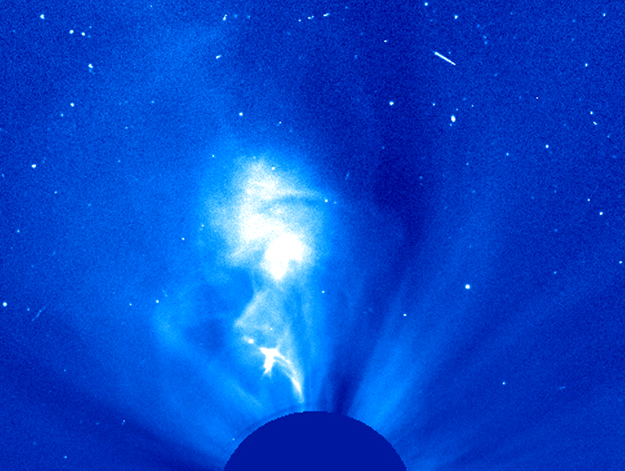 A large solar flare erupted from the Sun earlier today, launching a coronal mass ejection (CME) into space. This plasma 'cloud' is expected to pass Earth in 2 to 3 days, potentially causing increased nighttime auroras. No major effects on Earth are expected.

The solar flare occurred at about 05:05 CET today, and the resulting CME was detected by the Large Angle and Spectrometric Coronagraph (LASCO) instrument on board the ESA/NASA Solar & Heliospheric Observatory (SOHO) mission.

The solar flare was categorised by scientists as an 'X-class' flare; these are major events that can trigger planet-wide radio blackouts and long-lasting radiation storms.

If a CME is associated with a flare, the arrival of the CME at Earth can trigger a geomagnetic storm. For the CME detected this morning, which is expected to arrive around 7 or 8 March, no major geomagnetic impacts are expected due to the angle of approach of the cloud of plasma particles toward the Earth.

"We had another significant solar event early this morning. While an X-flare is considered 'large,' the geomagnetic impact is expected to be only minor to moderate, as the travelling CME is expected to mostly miss the Earth," said Juha-Pekka Luntama, Head of Space Weather at ESA's Space Situational Awareness programme office.

"In fact, there is already some increase in the flow of energetic particles from the Sun toward the Earth due to an earlier, but smaller 'M-class', solar flare; both these are part of a continuing trend of increased solar activity."

It is important to monitor, track and assess space weather events such as solar flares.

Such events are more than capable of affecting space-based telecommunications, broadcasting, weather services and navigation through to power distribution and terrestrial communications, especially at northern latitudes.