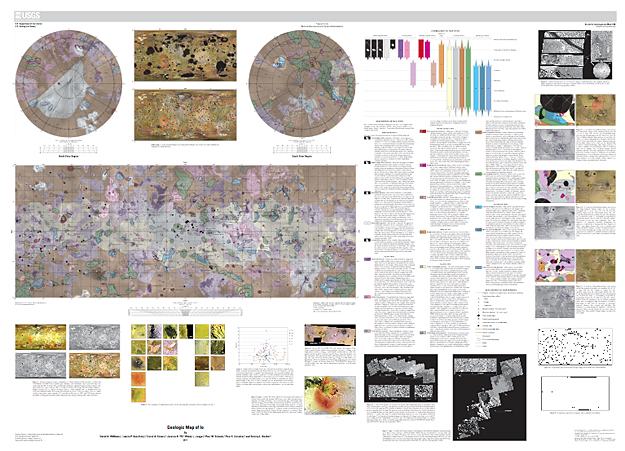 More than 400 years after Galileo's discovery of Io, the innermost of Jupiter's largest moons, a team of scientists led by Arizona State University (ASU) has produced the first complete global geologic map of the Jovian satellite. The map, published by the U. S. Geological Survey, depicts the characteristics and relative ages of some of the most geologically unique and active volcanoes and lava flows ever documented in the solar system.

Following its discovery by Galileo in January 1610, Io has been the focus of repeated telescopic and satellite scientific observation. These studies have shown that the orbital and gravitational relationships between Io, its sister moons Europa and Ganymede, and Jupiter cause massive, rapid flexing of its rocky crust. These tidal flexures generate tremendous heat within Io's interior, which is released through the many surface volcanoes observed.

"One of the reasons for making this map was to create a tool for continuing scientific studies of Io, and a tool for target planning of Io observations on future missions to the Jupiter system," says David Williams, a faculty research associate in the School of Earth and Space Exploration at ASU, who led the six-year research project to produce the geologic map.

The highly detailed, colorful map reveals a number of volcanic features, including: paterae (caldera-like depressions), lava flow fields, tholi (volcanic domes), and plume deposits, in various shapes, sizes and colors, as well as high mountains and large expanses of sulfur- and sulfur dioxide-rich plains. The mapping identified 425 paterae, or individual volcanic centers. One feature you will not see on the geologic map is impact craters.

"Io has no impact craters; it is the only object in the solar system where we have not seen any impact craters, testifying to Io's very active volcanic resurfacing," says Williams.

Io is extremely active, with literally hundreds of volcanic sources on its surface. Interestingly, although Io is so volcanically active, more than 25 times more volcanically active than Earth, most of the long-term surface changes resulting from volcanism are restricted to less than 15 percent of the surface, mostly in the form of changes in lava flow fields or within paterae.

"Our mapping has determined that most of the active hot spots occur in paterae, which cover less than 3 percent of Io's surface. Lava flow fields cover approximately 28 percent of the surface, but contain only 31 percent of hot spots," says Williams. "Understanding the geographical distribution of these features and hot spots, as identified through this map, are enabling better models of Io's interior processes to be developed."

The Io geologic map is unique from other USGS-published planetary geologic maps because surface features were mapped and characterized using four distinct global image mosaics. These image mosaics, produced by the USGS, combine the best images from NASA's Voyager 1 and 2 missions (acquired in 1979) as well as the Galileo orbiter (1995-2003).

Using the mosaics from the USGS, Williams mapped the entire surface of Io into 19 different types of surface material types, and determined their locations and sizes (areas). He then correlated the map information with the locations of all known hot spots (locations of active volcanism) to provide a global picture of the styles of volcanism on Io.

"Because of the non-uniform coverage of Io by multiple Voyager and Galileo flybys, including a variety of lighting conditions, it was absolutely necessary to use the different mosaics to identify specific geologic features, such as separating mountains and paterae from plains, and separating the colored plume deposits from the underlying geologic units," says Williams.

Though the geology history of Io has been studied in detail for several decades, completion of the geologic map establishes a critical framework for integrating and comparing diverse studies.

"Because Io is so active, and continues to be studied by Earth-based telescopes, we are doing something different than producing just the paper geologic map," says Williams. "We are also making an online Io database, to include the geologic map, the USGS mosaics, and all useful Galileo spacecraft observations of Io. This database, when completed later this year, will allow users to track the history of surface changes due to volcanic activity. We also have proposals submitted to NASA to include in our Io database Earth-based telescopic observations and images from the February 2007 NASA New Horizons spacecraft flyby, to create a single online source to study the history of Io volcanism."

The geologic map can be downloaded from the USGS here: http://pubs.usgs.gov/sim/3168

The project was funded by the National Aeronautics and Space Administration through its Outer Planets Research and Planetary Geology and Geophysics Programs. Technical and editorial support for map production was provided by the USGS Astrogeology Science Center in Flagstaff, Ariz.