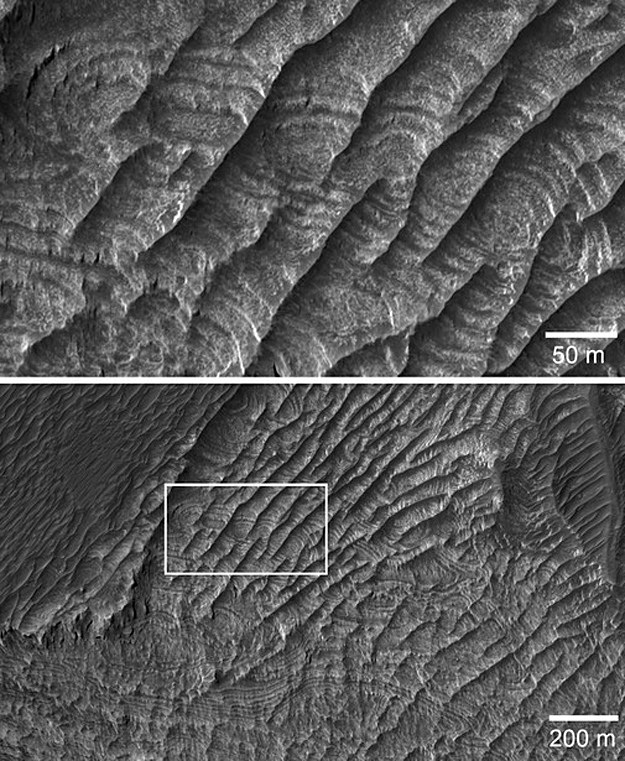 An odd, previously unseen landform could provide a window into the geological history of Mars, according to new research by University of Washington geologists.

They call the structures periodic bedrock ridges (and they use the abbreviation PBRs to evoke a favorite brand of beer). The ridges look like sand dunes but, rather than being made from material piled up by the wind, the scientists say the ridges actually form from wind erosion of bedrock.

"These bedforms look for all the world like sand dunes but they are carved into hard rock by wind," said David Montgomery, a UW professor of Earth and space sciences. It is something there are not many analogs for on Earth."

He believes the ridges, while still bedrock, are composed of a softer, more erodible material than typical bedrock and were formed by an unusual form of wind erosion that occurs perpendicular to the prevailing wind rather than in the same direction.

He contrasts the ridges with another bedrock form called a yardang, which has been carved over time by headwinds. A yardang has a wide, blunt leading edge in the face of the wind, and its sides are tapered so that it resembles a teardrop.

In the case of periodic bedrock ridges, Montgomery believes high surface winds on Mars are deflected into the air by a land formation, and they erode the bedrock in the area where they settle back to the surface.

Spacing between ridges depends on how long it takes for the winds to come back to the surface, and that is determined by the strength of the wind, the size of the deflection and the density of the atmosphere, he said.

The discovery is important because if the ridges were actually created by wind depositing material into dunes, "you're not going to have information from any prior history of the material that is exposed at the surface," he said.

"But if it's cut into instead, and you're looking at the residual of a rock that has been eroded away, you can still get the history of what was happening long ago from that spot," Montgomery said.

"You could actually go back and look at some earlier eras in Martian history, and the wind would have done us the favor of exposing the layers that would have that history within it," he said. "There are some areas of the Martian surface, potentially large areas, that up until now we've thought you couldn't really get very far back into Mars history geologically."

Montgomery is the lead author of a paper documenting the discovery published online March 9 in the Journal of Geophysical Research, a journal of the American Geophysical Union. Coauthors are Joshua Bandfield, a UW research assistant professor of Earth and space sciences, and Scott Becker, who did the work as an undergraduate in Earth and space sciences and has received his degree. The work was funded in part by NASA.

There could be landforms on Earth that are somewhat similar to periodic bedrock ridges, Montgomery said, but to date there's nothing exactly like it, largely because there are not many bedrock landscapes on Earth in which wind is the main erosion agent.

"There are very few places ... where you have bedrock exposed at the surface where there isn't also water that is carving valleys, that's shaping the topography," he said. "Mars is a different planet, obviously, and the biggest difference is the lack of fluvial action, the lack of water working on the surface."