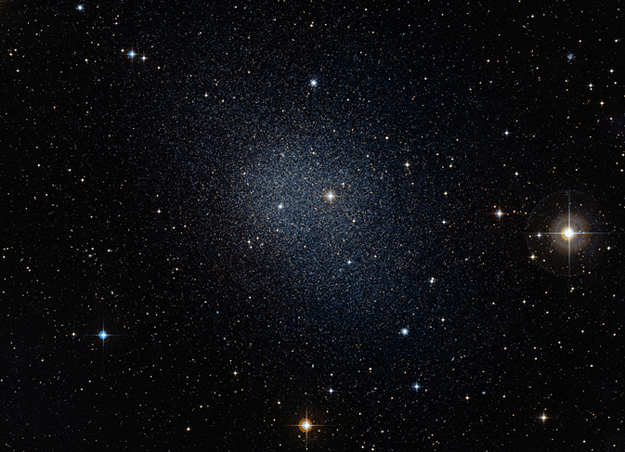 This dwarf spheroidal galaxy in the constellation Fornax is a satellite of our Milky Way and is one of 10 used in Fermi's dark matter search. The motions of the galaxy's stars indicate that it is embedded in a massive halo of matter that cannot be seen. (Credit: ESO/Digital Sky Survey 2)

There's more to the cosmos than meets the eye. About 80 percent of the matter in the universe is invisible to telescopes, yet its gravitational influence is manifest in the orbital speeds of stars around galaxies and in the motions of clusters of galaxies. Yet, despite decades of effort, no one knows what this "dark matter" really is. Many scientists think it's likely that the mystery will be solved with the discovery of new kinds of subatomic particles, types necessarily different from those composing atoms of the ordinary matter all around us. The search to detect and identify these particles is underway in experiments both around the globe and above it.

Scientists working with data from NASA's Fermi Gamma-ray Space Telescope have looked for signals from some of these hypothetical particles by zeroing in on 10 small, faint galaxies that orbit our own. Although no signals have been detected, a novel analysis technique applied to two years of data from the observatory's Large Area Telescope (LAT) has essentially eliminated these particle candidates for the first time.

"In effect, the Fermi LAT analysis compresses the theoretical box where these particles can hide," said Jennifer Siegal-Gaskins, a physicist at the California Institute of Technology in Pasadena, Calif., and a member of the Fermi LAT Collaboration. Earlier today, she discussed the latest results of space-based dark matter searches in an invited talk at a meeting of the American Physical Society (APS) in Atlanta, Ga.

WIMPs, or Weakly Interacting Massive Particles, represent a favored class of dark matter candidates. Some WIMPs may mutually annihilate when pairs of them interact, a process expected to produce gamma rays -- the most energetic form of light -- that the LAT is designed to detect.

"One of the best places to look for these faint gamma-ray signals is in dwarf spheroidal galaxies, small satellites of our own Milky Way galaxy that we know possess large amounts of dark matter," Siegal-Gaskins explained. "From an astrophysical perspective, these are downright boring systems, with little gas or star formation and no objects like pulsars or supernova remnants that emit gamma rays."

In addition, many dwarfs lie far away from the plane of our galaxy, which produces a broad band of diffuse gamma-ray emission that stretches all around the sky. Selecting only dwarf galaxies at great distances from this plane helps minimize interference from the Milky Way.

The team examined two years of LAT-detected gamma rays with energies in the range from 200 million to 100 billion electron volts (GeV) from 10 of the roughly two dozen dwarf galaxies known to orbit the Milky Way. Instead of analyzing the results for each galaxy separately, the scientists developed a statistical technique -- they call it a "joint likelihood analysis" -- that evaluates all of the galaxies at once without merging the data together. No gamma-ray signal consistent with the annihilations expected from four different types of commonly considered WIMP particles was found.

For the first time, the results show that WIMP candidates within a specific range of masses and interaction rates cannot be dark matter. A paper detailing these results appeared in the Dec. 9, 2011, issue of Physical Review Letters.

"The fact that we look at 10 dwarf galaxies jointly not only increases the statistics, but it also makes the analysis much less sensitive to fluctuations in the gamma-ray background and to uncertainties in the way the dark matter may be distributed around the dwarfs," said Maja Llena Garde, a graduate student at Stockholm University in Sweden and a co-author of the study.

For any given properties of a dark matter particle, the distribution of the particles has a significant impact on the expected gamma-ray signal, a wrinkle that often is handled inadequately, if at all, in previous studies.

The motions of a dwarf galaxy's stars trace out the profile of the massive dark matter halo in which they're embedded, but these tiny galaxies often have very few stars to track. The result is uncertainty in the way dark matter is distributed along the line of sight to the dwarf, which affects the expected flux of gamma rays detected by the LAT. By addressing uncertainties in the dwarfs' dark matter profiles, the LAT team's results are among the most accurate.

"An important element of this work is that we were able to take the statistical uncertainties from an updated study of the dwarf stellar motions and factor it into the LAT data analysis," said Johann Cohen-Tanugi, a physicist at the Laboratory of the Universe and Particles at the University of Montpellier 2 in France and a member of the research team.

"This treatment constitutes a significant step forward, and we hope that future studies will follow our example," noted co-author Jan Conrad, a physics professor at Stockholm University.

The team is in the process of following up the two-year analysis with new ones that will incorporate additional Fermi observing time, improvements made to the LAT's sensitivity and the inclusion of higher-energy gamma rays. Additionally, sky surveys now ramping up may discover new dwarf galaxies that can be included in future studies.

Other members of the LAT Collaboration presenting APS talks on Fermi's dark matter work include Alex Drlica-Wagner and Elliott Bloom, both from the Kavli Institute for Particle Astrophysics and Cosmology (KIPAC), jointly located at SLAC National Accelerator Laboratory and Stanford University, Calif.

On Tuesday, April 3, William Atwood, a physicist at the Santa Cruz Institute for Particle Physics at the University of California Santa Cruz, will deliver his APS prize lecture on the development of Fermi. Atwood was the originator and principal architect of Fermi's LAT. He also played a role in shaping the alliance of physicists from the U.S., Europe, and Japan that forms the LAT Collaboration. For his leading work on the design, construction and use of Fermi's Large Area Telescope, the society awarded him its 2012 W. K. H. Panofsky Prize in Experimental Particle Physics.
'