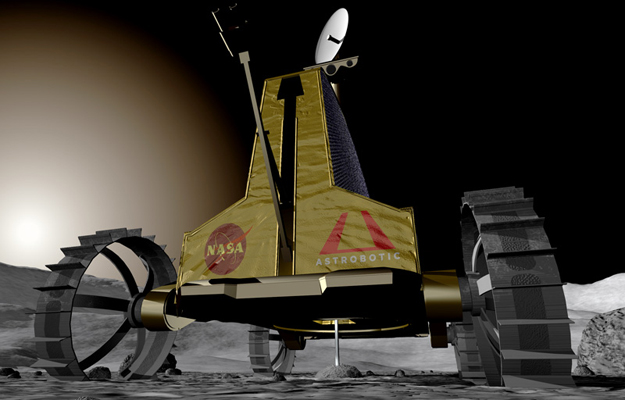 Astrobotic Technology unveiled its new Polaris lunar rover design, which will prospect for potentially rich deposits of water ice, methane and other resources at the moon's north pole in three years.

A powerful Falcon 9 rocket from SpaceX will launch Polaris from Cape Canaveral in late October 2015. Four days later Polaris will land during north pole summer, when patches of ground that are in cold shadow most of the year get brief illumination. This is where ice will be found closest to the surface, and when a solar-powered robot will get the sunlight needed to sustain exploration. Polaris will search for ice for the next 12 days until sundown in early November.

The Apollo expeditions only visited six spots along the Moon's equator, so the water, methane, carbon monoxide and other volatiles frozen at the poles went unnoticed for decades. Recent orbiting satellites and a NASA probe that impacted near the south pole showed that polar regions offer resources that could speed human settlement of the solar system. These resources can be turned into rocket propellant to refuel spacecraft for their return trip to Earth; lunar propellant also can be shipped to Earth orbit to fuel Mars-bound crewed expeditions at less cost than launching propellant from the ground.

Polaris carries up to 175 lbs (80kg) of payload, such as a drill and instruments to analyze samples from the drill. To find the best spot to drill, two sensors will look for signs of hidden ice beneath the surface layer of dry soil. A neutron spectrometer will measure the number of neutrons given off by the first yard of soil beneath the rover; a dip in the reading indicates neutrons coming in from space are being absorbed by hydrogen (in water or methane) in ice beneath the robot. A near infrared spectrometer will look for variations in surface temperature that may hint at ice below.

Polaris is adapted from a lunar excavation machine that Astrobotic has been prototyping under a NASA contract granted in 2010. After Polaris and other prospecting robots find the highest ice concentrations, excavation robots will remove the covering layer of dry soil to recover the ices and deliver them to a plant that turns them into rocket propellant.

Astrobotic delivers payloads and collects data for space agencies, aerospace corporations and academic researchers. For corporate sponsors, it delivers promotions that involve customers directly in the adventure of lunar exploration. Astrobotic was spun out in 2008 from Carnegie Mellon University, where it funds research into lunar robotics. More information is available at: www.astrobotic.net.