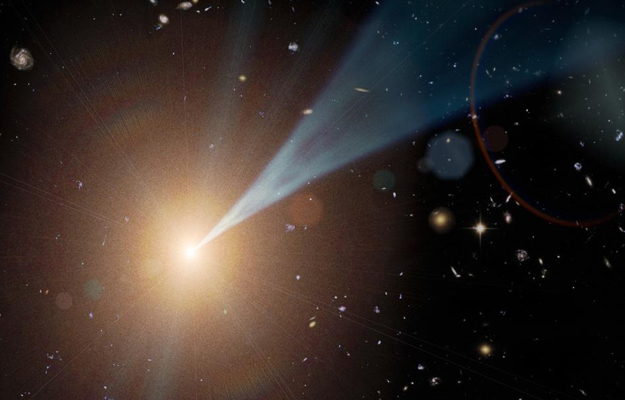 Astronomers are actively hunting a class of supermassive black holes throughout the universe called blazars thanks to data collected by NASA's Wide-field Infrared Survey Explorer (WISE). The mission has revealed more than 200 blazars and has the potential to find thousands more.

Blazars are among the most energetic objects in the universe. They consist of supermassive black holes actively "feeding," or pulling matter onto them, at the cores of giant galaxies. As the matter is dragged toward the supermassive hole, some of the energy is released in the form of jets traveling at nearly the speed of light. Blazars are unique because their jets are pointed directly at us.

"Blazars are extremely rare because it's not too often that a supermassive black hole's jet happens to point towards Earth," said Franceso Massaro of the Kavli Institute for Particle Astrophysics and Cosmology near Palo Alto, Calif., and principal investigator of the research, published in a series of papers in the Astrophysical Journal. "We came up with a crazy idea to use WISE's infrared observations, which are typically associated with lower-energy phenomena, to spot high-energy blazars, and it worked better than we hoped."

The findings ultimately will help researchers understand the extreme physics behind super-fast jets and the evolution of supermassive black holes in the early universe.

WISE surveyed the entire celestial sky in infrared light in 2010, creating a catalog of hundreds of millions of objects of all types. Its first batch of data was released to the larger astronomy community in April 2011 and the full-sky data were released last month.

Massaro and his team used the first batch of data, covering more than one-half the sky, to test their idea that WISE could identify blazars. Astronomers often use infrared data to look for the weak heat signatures of cooler objects. Blazars are not cool; they are scorching hot and glow with the highest- energy type of light, called gamma rays. However, they also give off a specific infrared signature when particles in their jets are accelerated to almost the speed of light.

One of the reasons the team wants to find new blazars is to help identify mysterious spots in the sky sizzling with high-energy gamma rays, many of which are suspected to be blazars. NASA's Fermi mission has identified hundreds of these spots, but other telescopes are needed to narrow in on the source of the gamma rays.

Sifting through the early WISE catalog, the astronomers looked for the infrared signatures of blazars at the locations of more than 300 gamma-ray sources that remain mysterious. The researchers were able to show that a little more than half of the sources are most likely blazars.

"This is a significant step toward unveiling the mystery of the many bright gamma-ray sources that are still of unknown origin," said Raffaele D'Abrusco, a co-author of the papers from Harvard Smithsonian Center for Astrophysics in Cambridge, Mass. "WISE's infrared vision is actually helping us understand what's happening in the gamma-ray sky."

The team also used WISE images to identify more than 50 additional blazar candidates and observed more than 1,000 previously discovered blazars. According to Massaro, the new technique, when applied directly to WISE's full-sky catalog, has the potential to uncover thousands more.

"We had no idea when we were building WISE that it would turn out to yield a blazar gold mine," said Peter Eisenhardt, WISE project scientist at NASA's Jet Propulsion Laboratory in Pasadena, Calif., who is not associated with the new studies. "That's the beauty of an all-sky survey. You can explore the nature of just about any phenomenon in the universe."

The Kavli Institute for Particle Astrophysics and Cosmology is a joint institute of Stanford University and SLAC National Accelerator Laboratory in Menlo Park, Calif.

JPL manages and operates WISE for NASA's Science Mission Directorate in Washington. The principal investigator for WISE, Edward Wright, is at UCLA. The mission was competitively selected under NASA's Explorers Program, managed by the Goddard Space Flight Center in Greenbelt, Md. The science instrument was built by the Space Dynamics Laboratory in Logan, Utah, and the spacecraft was built by Ball Aerospace & Technologies Corp. in Boulder, Colo. Science operations and data processing and archiving take place at the Infrared Processing and Analysis Center at the California Institute of Technology in Pasadena. Caltech manages JPL for NASA.