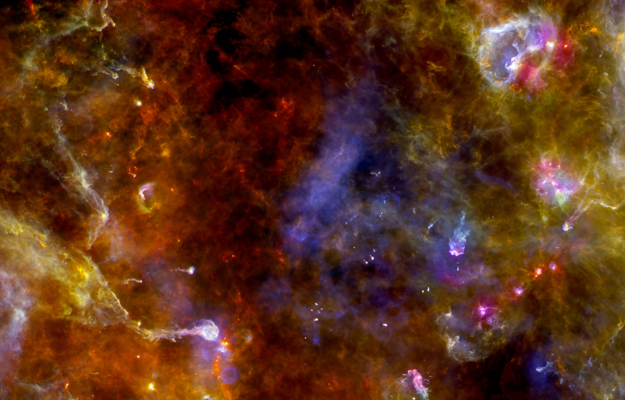 Chaotic networks of dust and gas signpost the next generations of massive stars in this stunning new image of the Cygnus-X star-nursery captured by ESA's Herschel space observatory.

Cygnus-X is an extremely active region of massive-star birth some 4500 light-years from Earth in the constellation of Cygnus, the Swan.

Using Herschel's far-infrared eyes, astronomers can seek out regions where dust has been gently heated by stars, pointing them to dense clumps of gas where new generations of stars are forming.

Bright white areas highlight zones where large stars have recently formed out of turbulent clouds, especially evident in the chaotic network of filaments seen in the right-hand portion of the image.

Here, dense knots of gas and dust mark intersections where filaments meet and collapse to form new stars, and where bubble-like structures are carved by their immense radiation.

In the centre of the image, fierce radiation and powerful stellar winds from stars undetected at Herschel's wavelengths have partly cleared and heated interstellar material, which then glows blue in this representation.

The left-hand part of the scene is dominated by a pillar of gas whose shape resembles that of the neck of a swan.

Below and to the right, a shell of gas and dust has likely been ejected from a supergiant star at its centre, but which is not seen directly in this image.

Strings of compact red objects scattered throughout the scene map the cold seeds of future generations of stars.

The image highlights the unique capabilities of Herschel to probe the birth of large stars and their influence on the surrounding interstellar material with a level of detail at far-infrared wavelengths that has never before been available.