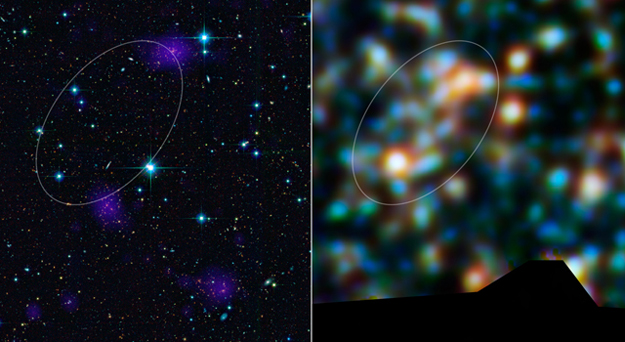 The Herschel Space Observatory has discovered a giant, galaxy-packed filament ablaze with billions of new stars. The filament connects two clusters of galaxies that, along with a third cluster, will smash together and give rise to one of the largest galaxy superclusters in the universe.

The filament is the first structure of its kind spied in a critical era of cosmic buildup when colossal collections of galaxies called superclusters began to take shape. The glowing galactic bridge offers astronomers a unique opportunity to explore how galaxies evolve and merge to form superclusters.

"We are excited about this filament, because we think the intense star formation we see in its galaxies is related to the consolidation of the surrounding supercluster," says Kristen Coppin, an astrophysicist at McGill University in Canada, and lead author of a new paper in Astrophysical Journal Letters.

"This luminous bridge of star formation gives us a snapshot of how the evolution of cosmic structure on very large scales affects the evolution of the individual galaxies trapped within it," says Jim Geach, a co-author who is also based at McGill.

The intergalactic filament, containing hundreds of galaxies, spans 8 million light-years and links two of the three clusters that make up a supercluster known as RCS2319. This emerging supercluster is an exceptionally rare, distant object whose light has taken more than seven billion years to reach us.

RCS2319 is the subject of a huge observational study, led by Tracy Webb and her group at McGill. Previous observations in visible and X-ray light had found the cluster cores and hinted at the presence of a filament. It was not until astronomers trained Herschel on the region, however, that the intense star-forming activity in the filament became clear. Dust obscures much of the star-formation activity in the early universe, but telescopes like Herschel can detect the infrared glow of this dust as it is heated by nascent stars.

Researchers chalk up the blistering pace of star formation in the filament to the fact that galaxies within it are being crunched into a relatively small cosmic volume under the force of gravity. "A high rate of interactions and mergers between galaxies could be disturbing the galaxies' gas reservoirs, igniting bursts of star formation," said Geach.

By studying the filament, astronomers will be able to explore the fundamental issue of whether "nature" versus "nurture" matters more in the life progression of a galaxy. "Is the evolution of a galaxy dominated by intrinsic properties such as total mass, or do wider-scale cosmic environments largely determine how galaxies grow and change?" Geach asked. "The role of the environment in influencing galactic evolution is one of the key questions of modern astrophysics."

The galaxies in the RCS2319 filament will eventually migrate toward the center of the emerging supercluster. Over the next seven to eight billion years, astronomers think RCS2319 will come to look like gargantuan superclusters in the local universe, like the nearby Coma cluster. These advanced clusters are chock-full of "red and dead" elliptical galaxies that contain aged, reddish stars instead of young ones.

"The galaxies we are seeing as starbursts in RCS2319 are destined to become dead galaxies in the gravitational grip of one of the most massive structures in the universe," said Geach. "We're catching them at the most important stage of their evolution."