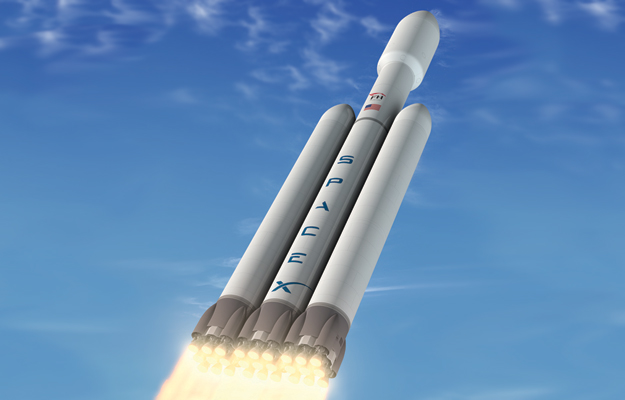 "SpaceX is very proud to have the confidence of Intelsat, a leader in the satellite communication services industry," said Elon Musk, SpaceX CEO and Chief Designer. "The Falcon Heavy has more than twice the power of the next largest rocket in the world. With this new vehicle, SpaceX launch systems now cover the entire spectrum of the launch needs for commercial, civil and national security customers."

"Timely access to space is an essential element of our commercial supply chain," said Thierry Guillemin, Intelsat CTO. "As a global leader in the satellite sector, our support of successful new entrants to the commercial launch industry reduces risk in our business model. Intelsat has exacting technical standards and requirements for proven flight heritage for our satellite launches. We will work closely with SpaceX as the Falcon Heavy completes rigorous flight tests prior to our future launch requirements."

This is the first commercial contract for SpaceX's Falcon Heavy launch vehicle. Under the agreement, an Intelsat satellite will be launched into geosynchronous transfer orbit (GTO).

About the Falcon Heavy

Falcon Heavy is the most powerful rocket in the world and historically is second only to the Apollo-era Saturn V moon rocket. Capable of lifting 53 metric tons (117,000 pounds) to low Earth orbit and over 12 metric tons (26,000 pounds) to GTO, Falcon Heavy will provide more than twice the performance to low Earth orbit of any other launch vehicle. This will allow SpaceX to launch the largest satellites ever flown and will enable new missions. Building on the reliable flight proven architecture of the Falcon 9 launch vehicle, Falcon Heavy is also designed for exceptional reliability. The vehicle is designed to meet both NASA human rating standards as well as the stringent U.S. Air Force requirements for the Evolved Expendable Launch Vehicle (EELV) program, making it an attractive solution for commercial, civil and military customers.

SpaceX designs, manufactures and launches the world's most advanced rockets and spacecraft. With a diverse manifest of 40 launches to deliver commercial and government satellites to orbit, SpaceX is the world's fastest growing launch services provider. In 2010, SpaceX became the first commercial company in history to put a spacecraft into orbit and return it safely to Earth. With the retirement of the space shuttle, the SpaceX Falcon 9 rocket and Dragon spacecraft are carrying cargo, and one day astronauts, to and from the space station for NASA. Founded in 2002 by Elon Musk, SpaceX is a private company owned by management and employees, with minority investments from Founders Fund, Draper Fisher Jurvetson, and Valor Equity Partners. The company has over 1,800 employees in California, Texas, Washington, D.C., and Florida. For more information, visit www.SpaceX.com.