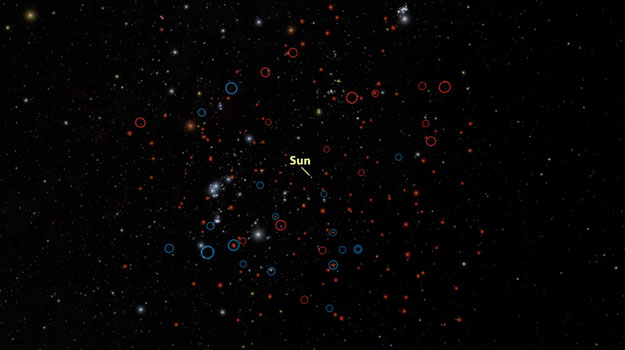 Astronomers are getting to know the neighbors better. Our Sun resides within a spiral arm of our Milky Way galaxy about two-thirds of the way out from the center. It lives in a fairly calm, suburb-like area with an average number of stellar residents. Recently, NASA's Wide-field Infrared Survey Explorer, or WISE, has been turning up a new crowd of stars close to home: the coldest of the brown dwarf family of "failed" stars.

Now, just as scientists are "meeting and greeting" the new neighbors, WISE has a surprise in store: there are far fewer brown dwarfs around us than predicted.

"This is a really illuminating result," said Davy Kirkpatrick of the WISE science team at NASA's Infrared Processing and Analysis Center at the California Institute of Technology in Pasadena. "Now that we're finally seeing the solar neighborhood with keener, infrared vision, the little guys aren't as prevalent as we once thought."

Previous estimates had predicted as many brown dwarfs as typical stars, but the new initial tally from WISE shows just one brown dwarf for every six stars. It's the cosmic equivalent to finally being able to see down a mysterious, gated block and finding only a few homes.

Nonetheless, the observations are providing crucial information about how these exotic worlds form, and hinting at what their population densities might be like in our galaxy and beyond.

"WISE is finding new, cold worlds that are ripe for exploration in their own right," said Kirkpatrick. "We think they can form by several different mechanisms, including having their growth stunted by a variety of factors that prevent them from becoming full-blown stars. Still, we don't know exactly how this process works."

WISE was launched in 2009 and surveyed the entire sky in infrared light in 2010. One of the mission's main science goals was to survey the sky for the elusive brown dwarfs. These small bodies start their lives like stars, but lack the bulk required to burn nuclear fuel. With time, they cool and fade, making them difficult to find.

Improvements in WISE's infrared vision over past missions have allowed it to pick up the faint glow of many of these hidden objects. In August 2011, the mission announced the discovery of the coolest brown dwarfs spotted yet, a new class of stars called Y dwarfs. One of the Y dwarfs is less than 80 degrees Fahrenheit (25 degrees Celsius), or about room temperature, making it the coldest star-like body known. Since then, the WISE science team has surveyed the entire landscape around our Sun and discovered 200 brown dwarfs, including 13 Y dwarfs.

Determining the distances to these objects is a key factor in knowing their population density in our solar neighborhood. After carefully measuring the distance to several of the coldest brown dwarfs via a method called parallax, the scientists were able to estimate the distances to all the newfound brown dwarfs. They concluded that about 33 brown dwarfs reside within 26 light-years of Sun. There are 211 stars within this same volume of space, so that means there are about six stars for every brown dwarf.

"Having fewer brown dwarfs than expected in our celestial backyard just means that each new one we discover plays a critical role in our overall understanding of these cold objects," said Chris Gelino, a co-author of the new research who is also at the Infrared Processing and Analysis Center. "These brown dwarfs are fascinating objects that are bridging the gap between the coldest stars and Jupiter."

Kirkpatrick emphasized that the results are still preliminary: it is highly likely that WISE will discover additional Y dwarfs, but not in vast numbers, and probably not closer than the closest known star, Proxima Centauri. Those discoveries could bring the ratio of brown dwarfs to stars up a bit, to about 1:5 or 1:4, but not to the 1:1 level previously anticipated.

"This is how science progresses as we obtain better and better data," said Kirkpatrick. "With WISE, we were able to test our predictions and show they were wrong. We had made extrapolations based on discoveries from projects like the Two-Micron All-Sky Survey, but WISE is giving us our first look at the coldest brown dwarfs we're only now able to detect."

The new observations still allow the possibility of free-floating planets up to a few times the mass of Jupiter beyond a few light-years from the Sun, which other surveys have predicted might exist. Those bodies would be too faint for WISE to see in the processed data in hand.

The new results are due to appear in the July 10 issue of The Astrophysical Journal [preprint: http://arxiv.org/abs/1205.2122]. Other authors are: Michael Cushing of the University of Toledo, Ohio; Gregory Mace, Ian McLean and Ned Wright from UCLA; Roger Griffith and Kenneth Marsh of the Infrared Processing and Analysis Center at Caltech; Michael Skrutskie of the University of Virginia, Charlottesville; Peter Eisenhardt and Amy Mainzer of NASA's Jet Propulsion Laboratory, Pasadena, Calif.; Adam Burgasser of the University of California, San Diego; and Christopher Tinney, Stephen Parker, and Graeme Salter of the University of New South Wales, Australia.

JPL manages, and operated, WISE for NASA's Science Mission Directorate. The spacecraft was put into hibernation mode after it scanned the entire sky twice, completing its main objectives. Edward Wright is the principal investigator and is at UCLA. The mission was selected competitively under NASA's Explorers Program managed by the agency's Goddard Space Flight Center in Greenbelt, Md. The science instrument was built by the Space Dynamics Laboratory in Logan, Utah. The spacecraft was built by Ball Aerospace & Technologies Corp. in Boulder, Colo. Science operations and data processing take place at the Infrared Processing and Analysis Center at the California Institute of Technology in Pasadena. Caltech manages JPL for NASA.

The Two-Micron All-Sky Survey (2MASS) mission was a joint effort between Caltech, the University of Massachusetts and NASA/JPL. Data are archived at the Infrared Processing and Analysis Center at Caltech.