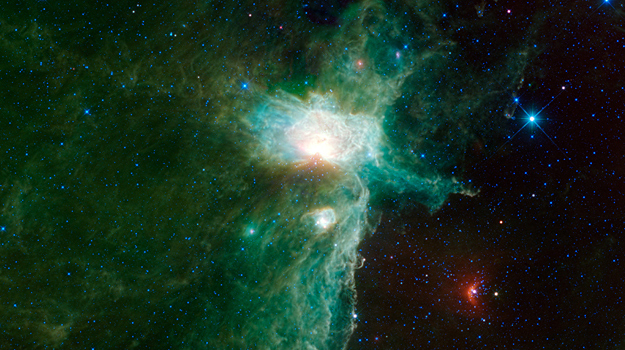 A new image from NASA's Wide-field Infrared Survey Explorer, or WISE, shows the candle-like Flame nebula lighting up a cavern of dust. The Flame nebula is part of the Orion complex, a turbulent star-forming area located near the constellation's star-studded belt.

The image is being released today along with a new batch of data from the mission. Last March, WISE released its all-sky catalog and atlas containing infrared images and data on more than a half billion objects, including everything from asteroids to stars and galaxies. Now, the mission is offering up additional data from its second scan of the sky.

"If you're an astronomer, then you'll probably be in hog heaven when it comes to infrared data," said Edward (Ned) Wright of UCLA, the principal investigator of the WISE mission. "Data from the second sky scan are useful for studying stars that vary or move over time, and for improving and checking data from the first scan."

The new WISE view of the Flame nebula, in which colors are assigned to different channels of infrared light, looks like what appears to be a flaming candle sending off billows of smoke. In fact, the wispy tendrils in the image are part of the larger Orion star-forming complex, a huge dust cloud churning out new stars. In the Flame nebula, massive stars are carving a cavity in this dust. Intense ultraviolet light from a central massive star 20 times heavier than our Sun, and buried in the blanketing dust, is causing the cloud to glow in infrared light. This star would be almost as bright to our eyes as the three stars in Orion's belt, but the dust makes the star appear 4 billion times fainter than it really is.

Other features in this view include the nebula NGC 2023, seen as a bright circle in the lower half of the image, and the famous Horsehead nebula, which is hard to see but located to the right of one of the lower, vertical ridges. The bright red arc at lower right is a bow shock, where material in front of the speeding multiple-star system Sigma Orionis is piling up.

The data released today cover about one-third of the mission's second full scan of the sky. They were taken from August to September 2010 as the telescope began to deplete its coolant, operating with three of its four infrared detectors. The coolant kept the telescope chilled to prevent its heat, or infrared radiation, from interfering with the observations. As the telescope warmed during this period, one of the four channels on WISE was overwhelmed by the infrared radiation.

An introduction and quick guide to accessing the WISE all-sky archive for astronomers:
http://wise2.ipac.caltech.edu/docs/release/allsky/

NASA's Jet Propulsion Laboratory, Pasadena, Calif., manages, and operated, WISE for NASA's Science Mission Directorate. The spacecraft was put into hibernation mode in 2011 after it scanned the entire sky twice, completing its main objectives. Edward Wright is the principal investigator and is at UCLA. The mission was selected competitively under NASA's Explorers Program managed by the agency's Goddard Space Flight Center in Greenbelt, Md. The science instrument was built by the Space Dynamics Laboratory in Logan, Utah. The spacecraft was built by Ball Aerospace & Technologies Corp. in Boulder, Colo. Science operations and data processing take place at the Infrared Processing and Analysis Center at the California Institute of Technology in Pasadena. Caltech manages JPL for NASA.