All WISE Survey Data Now Available to the Public 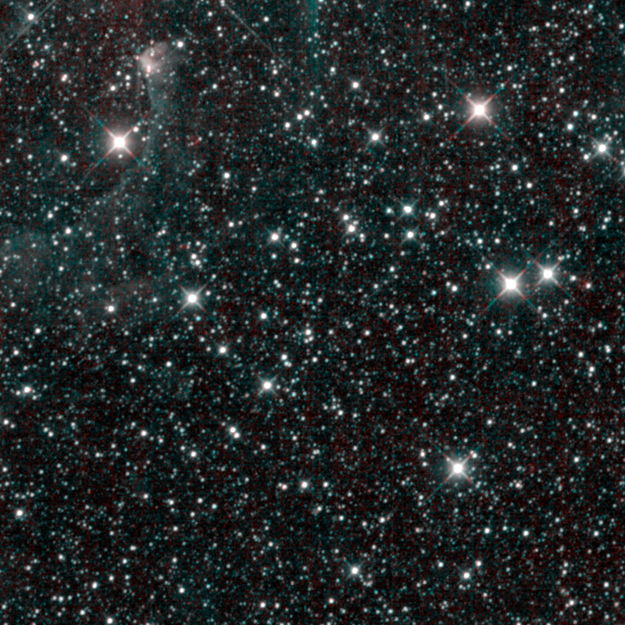 On the morning of February 1st, 2011, NASA's Wide-field Infrared Survey Explorer, or WISE, took its last snapshot of the sky. This "last light" image is reminiscent of the "first light" image from WISE, taken only 13 months prior. WISE's final picture shows thousands of stars in a patch of the Milky Way Galaxy, covering an area 3 times the size of the full Moon, in the constellation Perseus. In the upper left corner, a faint wispy cloud can be seen bending around a pulsating variable star called EV Persei.

This latest release of data comes from the period of October 2010 - February 2011, after the satellite's solid hydrogen coolant had run out and the telescope had warmed up to a comparatively balmy 73.5 K (73.5 degrees centigrade above absolute zero, or minus 327 degrees Fahrenheit). During the fully cryogenic phase of the mission the two long-wavelength detectors (12 and 22 microns) had been as cold as 8 K and the shorter two wavelengths (3.4 and 4.6 microns) were a touch warmer at 32 K. After the warm-up, the shorter wavelength detectors continued to operate with sensitivities close to what they had during the cryogenic survey. NASA funded this phase of the mission, known as NEOWISE, to continue survey operations with these two detectors until it had completed a survey of the Main Asteroid Belt.

Previously, WISE released data covering the whole sky observed in 4 wavelengths from the fully cryogenic mission, and about 30% of the sky observed in 3-wavelengths while the cryogen was partially depleted. This latest release covers about 70% of the sky observed in nearly 2 million images. As with the previous data releases, it is accompanied by a database of billions of objects detected in the images. Data in this newest release have not yet been as thoroughly processed as the earlier releases, nor have they been composited to create more sensitive images, and the WISE team will release an improved version next year.

The full set of data from WISE now available to astronomers around the world will allow for new scientific studies of the cosmos for many years to come.
You can view all WISE data at the following locations: