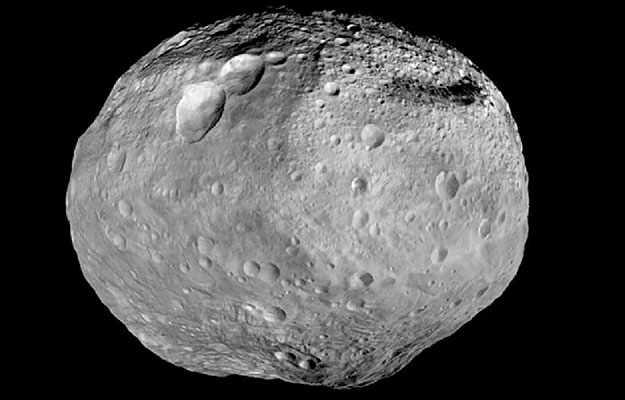 NASA's Dawn mission is releasing two parting views of the giant asteroid Vesta, using images that were among the last taken by the spacecraft as it departed its companion for the last year.

The first set of images is a color-coded relief map of Vesta's northern hemisphere, from the pole to the equator. It incorporates images taken just as Dawn began to creep over the high northern latitudes, which were dark when Dawn arrived in July 2011. The other image is a black-and-white mosaic that shows a full view of the giant asteroid, created by synthesizing some of Dawn's best images.

"Dawn has peeled back the veil on some of the mysteries surrounding Vesta, but we're still working hard on more analysis," said Christopher Russell, Dawn's principal investigator at UCLA. "So while Vesta is now out of sight, it will not be out of mind."

These will be the last daily images during the cruise to Dawn's second destination, the dwarf planet Ceres. Other images will be highlighted as findings are made. Other data will be archived at http://pds.nasa.gov .

JPL manages the Dawn mission for NASA's Science Mission Directorate in Washington. Dawn is a project of the directorate's Discovery Program, managed by NASA's Marshall Space Flight Center in Huntsville, Ala. The University of California at Los Angeles (UCLA) is responsible for overall Dawn mission science. Orbital Sciences Corp. in Dulles, Va., designed and built the spacecraft. The German Aerospace Center, the Max Planck Institute for Solar System Research, the Italian Space Agency and the Italian National Astrophysical Institute are international partners on the mission team. The California Institute of Technology in Pasadena manages JPL for NASA.