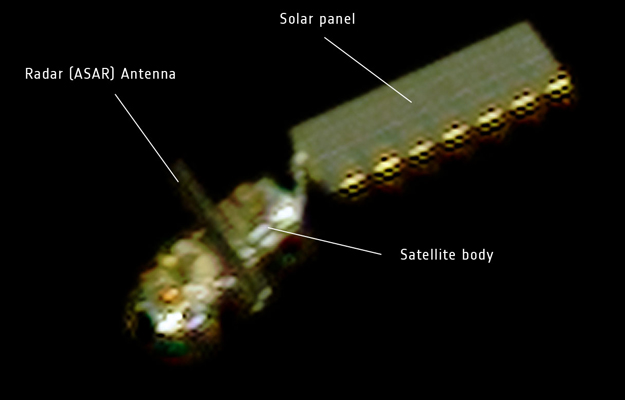 Space debris came into focus last week at the International Astronautical Congress in Naples, Italy. Envisat, ESA's largest Earth observation satellite, ended its mission last spring and was a subject of major interest in the Space Debris and Legal session.

Envisat was planned and designed in 1987-1990, a time when space debris was not considered to be a serious problem and before the existence of mitigation guidelines, established by the UN in 2007 and adopted the next year by ESA for all of its projects.

Only later, during the post-launch operational phase, did Envisat's orbit of about 780 km become a risky debris environment, particularly following the Chinese antisatellite missile test in 2007 and the collision between the Iridium and the Cosmos satellites in 2009.

Lowering Envisat to an orbit that would allow reentry within 25 years, however, was never an option because of its design and limited amount of fuel. Even if controllers had lowered the satellite immediately after launch in 2002, there would not have been enough fuel to bring it down low enough - to around 600 km - where it could reenter within 25 years.

In 2010, part of the remaining fuel was used to lower the satellite slightly into a less crowded orbit at 768 km, while keeping enough reserve to provide collision avoidance for several years. The lower orbit also ensured continuity of crucial Earth-observation data until the next generation of satellites - the Sentinels - are fully operational in 2013.

In April 2012, however, contact with Envisat was suddenly lost, preventing ESA from controlling the spacecraft and disrupting data provision to the international Earth observation user community. ESA is strongly committed to reducing space debris. Today, the deorbiting of missions is taken into consideration during the development of future satellites, and during the operations of current satellites when technically feasible.

Indeed, ESA decided to terminate operations of the 16-year-old ERS-2 satellite in 2011 because there was still enough fuel to lower its orbit to about 570 km, allowing it to reenter well within 25 years.

During the last years of Envisat, ESA began to investigate new technology to deorbit space debris in a controlled fashion.

The problem of debris in low orbits is of paramount importance. ESA space debris represents about 0.5% of the more than 16 000 objects catalogued by the US surveillance network. ESA is working together with other agencies to reinforce international cooperation in monitoring space debris and to study mitigation and remediation measures that will ensure the future of space endeavours.

During its extended operational lifetime, Envisat provided crucial Earth observation data not only to scientists, but also to many operational services, such as monitoring floods and oil spills. Its data supported civil protection authorities in managing natural and man-made disasters. An estimated 2500 scientific publications so far have been based on the data provided by the satellite during its ten-year life.