Ancient Australian fossils were on land, not at sea, geologist proposes 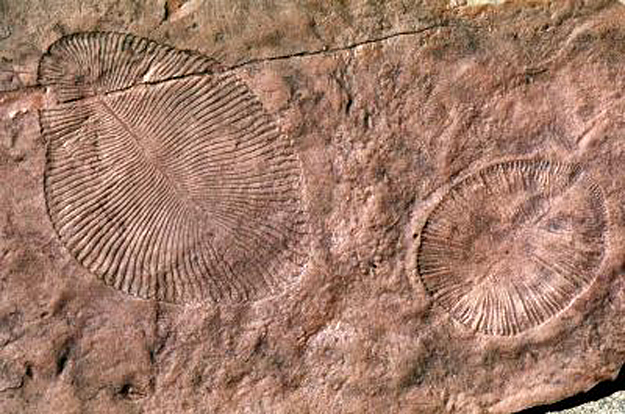 IMAGE: Dickinsonia fossils in South Australia, shown here, were likely formed by lichen or other microbial consortia, not from marine invertebrates or giant protists as previously theorized.

Ancient multicellular fossils long thought to be ancestors of early marine life are remnants of land-dwelling lichen or other microbial colonies, says University of Oregon scientist Gregory Retallack, who has been studying fossil soils of South Australia.

Ediacaran (pronounced EDI-akran) fossils date to 542-635 million years ago. They've been considered fossil jellyfish, worms and sea pens, but are preserved in ways distinct from marine invertebrate fossils. The fossils -- first discovered in 1946 in Australia's Ediacara Hills -- are found in iron-colored impressions similar to plant fossils and microbes in fossil soils.

Retallack, a native of Australia, examined ancient Ediacaran soils with an array of state-of-the-art chemical and microscopic techniques, including an electron microprobe and scanning electron microscope in the UO's CAMCOR Microanalytical Facility headed by John Donovan and rock-analysis technology in the UO's stable isotope laboratory of Ilya Bindeman.

The soils with fossils, Retallack writes in his study, "are distinguished by a surface called 'old elephant skin,' which is best preserved under covering sandstone beds." The healed cracks and lumpy appearance of sandy "old elephant skin" are most like the surface of microbial soil crusts in modern deserts.

"This discovery has implications for the tree of life, because it removes Ediacaran fossils from the ancestry of animals," said Retallack, professor of geological sciences and co-director of paleontological collections at the UO's Museum of Natural and Cultural History. His evidence, mostly gathered from a site in the Flinders Ranges, is presented in a paper placed online ahead of print by the journal Nature.

"These fossils have been a first-class scientific mystery," he said. "They are the oldest large multicellular fossils. They lived immediately before the Cambrian evolutionary explosion that gave rise to familiar modern groups of animals."

Retallack studied numerous Ediacaran fossils and determined that the diversity reflects a preference by the ancient organisms for "unfrozen, low salinity soils, rich in nutrients, like most terrestrial organisms." Thus the fossils in Australia's iconic red-rock ranges, he concludes, were landlubbers. In his closing paragraph, Retallack outlines implications for a variety of other Edicaran fossils, that could have been lichens, other microbial consortia, fungal fruiting bodies, slime molds, flanged pedestals of biological soil crusts, and even casts of needle ice.

Ediacaran fossils, he said, represent "an independent evolutionary radiation of life on land that preceded by at least 20 million years the Cambrian evolutionary explosion of animals in the sea." Increased chemical weathering by large organisms on land may have been needed to fuel the demand of nutrient elements by Cambrian animals. Independent discoveries of Cambrian fossils comparable with Ediacaran ones is evidence, he said, that even in the Cambrian, more than 500 million years ago, life on land may have been larger and more complex than life in the sea.

Retallack leaves open the possibility that some Ediacaran fossils found elsewhere in the world may not be land-based in origin, writing in his conclusion that the many different kinds of these fossils need to be tested and re-evaluated.

"The key evidence for this new view is that the beds immediately below the cover sandstones in which they are preserved were fossil soils," he said. "In other words the fossils were covered by sand in life position at the top of the soils in which they grew. In addition, frost features and chemical composition of the fossil soils are evidence that they grew in cold dry soils, like lichens in tundra today, rather than in tropical marine lagoons."

Fossil soils are usually recognized from root traces, soil horizons and soil structures, but in rocks of Ediacaran age, before the advent of rooted plants, only the second two criteria can be used to recognize fossil soils. Ediacaran fossil soils, Retallack said, represent ecosystems less effective at weathering than the modern array of ecosystems, so that soil horizons and soil structures are not as well developed as they are in modern soils.

"The research conducted by Dr. Retallack helps to unravel the mystery of very ancient life on Earth," said Kimberly Andrews Espy, UO vice president for research and innovation, and dean of the graduate school. "It also serves as an example of how technology, some of it developed at the University of Oregon, can be used to analyze materials from anywhere in the world."