NGC 602: Taken Under the "Wing" of the Small Magellanic Cloud 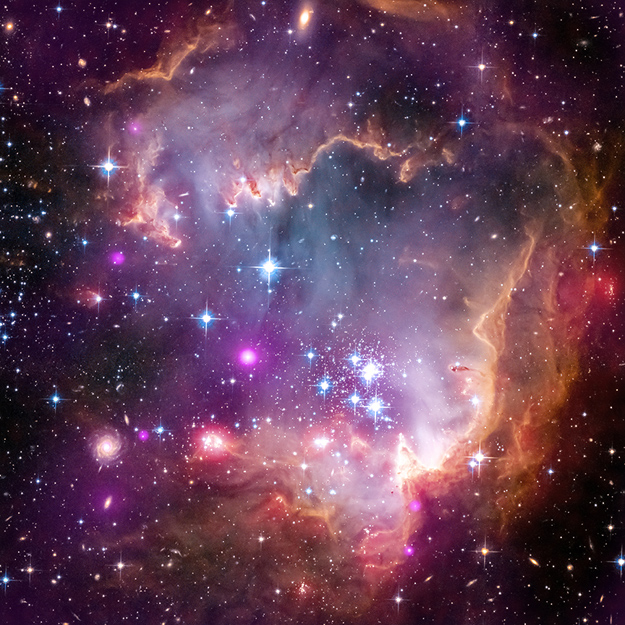 The Small Magellanic Cloud (SMC) is one of the Milky Way's closest galactic neighbors. Even though it is a small, or so-called dwarf galaxy, the SMC is so bright that it is visible to the unaided eye from the Southern Hemisphere and near the equator. Many navigators, including Ferdinand Magellan who lends his name to the SMC, used it to help find their way across the oceans.

Modern astronomers are also interested in studying the SMC (and its cousin, the Large Magellanic Cloud), but for very different reasons. Because the SMC is so close and bright, it offers an opportunity to study phenomena that are difficult to examine in more distant galaxies.

New Chandra data of the SMC have provided one such discovery: the first detection of X-ray emission from young stars with masses similar to our Sun outside our Milky Way galaxy. The new Chandra observations of these low-mass stars were made of the region known as the "Wing" of the SMC. In this composite image of the Wing the Chandra data is shown in purple, optical data from the Hubble Space Telescope is shown in red, green and blue and infrared data from the Spitzer Space Telescope is shown in red.

Astronomers call all elements heavier than hydrogen and helium -- that is, with more than two protons in the atom's nucleus -- "metals." The Wing is a region known to have fewer metals compared to most areas within the Milky Way. There are also relatively lower amounts of gas, dust, and stars in the Wing compared to the Milky Way.

Taken together, these properties make the Wing an excellent location to study the life cycle of stars and the gas lying in between them. Not only are these conditions typical for dwarf irregular galaxies like the SMC, they also mimic ones that would have existed in the early universe.

Most star formation near the tip of the Wing is occurring in a small region known as NGC 602, which contains a collection of at least three star clusters. One of them, NGC 602a, is similar in age, mass, and size to the famous Orion Nebula Cluster. Researchers have studied NGC 602a to see if young stars -- that is, those only a few million years old -- have different properties when they have low levels of metals, like the ones found in NGC 602a.

Using Chandra, astronomers discovered extended X-ray emission, from the two most densely populated regions in NGC 602a. The extended X-ray cloud likely comes from the population of young, low-mass stars in the cluster, which have previously been picked out by infrared and optical surveys, using Spitzer and Hubble respectively. This emission is not likely to be hot gas blown away by massive stars, because the low metal content of stars in NGC 602a implies that these stars should have weak winds. The failure to detect X-ray emission from the most massive star in NGC 602a supports this conclusion, because X-ray emission is an indicator of the strength of winds from massive stars. No individual low-mass stars are detected, but the overlapping emission from several thousand stars is bright enough to be observed.

The Chandra results imply that the young, metal-poor stars in NGC 602a produce X-rays in a manner similar to stars with much higher metal content found in the Orion cluster in our galaxy. The authors speculate that if the X-ray properties of young stars are similar in different environments, then other related properties -- including the formation and evolution of disks where planets form -- are also likely to be similar.

X-ray emission traces the magnetic activity of young stars and is related to how efficiently their magnetic dynamo operates. Magnetic dynamos generate magnetic fields in stars through a process involving the star's speed of rotation, and convection, the rising and falling of hot gas in the star's interior.

The combined X-ray, optical and infrared data also revealed, for the first time outside our galaxy, objects representative of an even younger stage of evolution of a star. These so-called "young stellar objects" have ages of a few thousand years and are still embedded in the pillar of dust and gas from which stars form, as in the famous "Pillars of Creation" of the Eagle Nebula.

Additional interactive image, podcast, and video on the finding:
http://chandra.si.edu