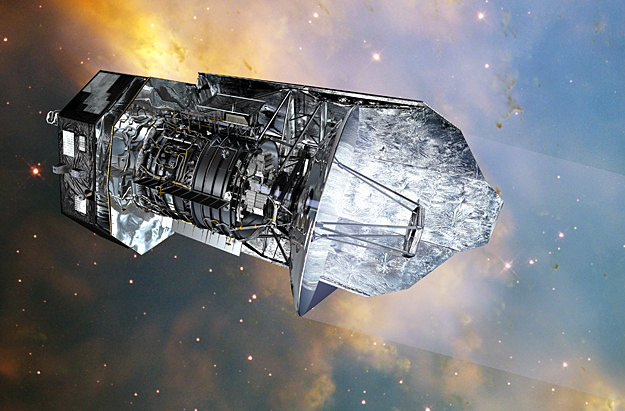 ESA's Herschel space observatory has made detailed observations of surprisingly hot molecular gas that may be orbiting or falling towards the supermassive black hole lurking at the center of our Milky Way galaxy.

Our local black hole is located in a region known as Sagittarius A* -- Sgr A* -- after a nearby radio source. It has a mass about four million times that of our Sun and lies around 26,000 light-years away from the solar system.

Even at that distance, it is a few hundred times closer to us than any other galaxy with an active black hole at its center, making it the ideal natural laboratory to study the environment around these enigmatic objects.

Vast amounts of dust lie in the plane of the Milky Way between here and its center, obscuring our view at visible wavelengths. But at far-infrared wavelengths, it is possible to peer through the dust, affording Herschel's scientists the chance to study the turbulent innermost region of our galaxy in great detail.

Herschel has detected a great variety of simple molecules at the Milky Way's heart, including carbon monoxide, water vapor and hydrogen cyanide. By analyzing the signature from these molecules, astronomers have been able to probe some of the fundamental properties of the interstellar gas surrounding the black hole.

"Herschel has resolved the far-infrared emission within just 1 light-year of the black hole, making it possible for the first time at these wavelengths to separate emission due to the central cavity from that of the surrounding dense molecular disc," says Javier Goicoechea of the Centro de Astrobiologia, Spain, and lead author of the paper reporting the results.

The biggest surprise was quite how hot the molecular gas in the innermost central region of the galaxy gets. At least some of it is around 1,000*C, much hotter than typical interstellar clouds, which are usually only a few tens of degrees above the -273*C of absolute zero.

While some of the heating is down to the fierce ultraviolet radiation pouring from a cluster of massive stars that live very close to the galactic center, they are not enough to explain the high temperatures alone.

In addition to the stellar radiation, Dr. Goicoechea's team hypothesize that emission from strong shocks in highly-magnetized gas in the region may be a significant contributor to the high temperatures. Such shocks can be generated in collisions between gas clouds, or in material flowing at high speed from stars and protostars.

"The observations are also consistent with streamers of hot gas speeding towards Sgr A*, falling towards the very center of the galaxy," says Dr. Goicoechea. "Our galaxy's black hole may be cooking its dinner right in front of Herschel's eyes."

Just before material falls into a black hole, it is heated up enormously and can cause high-energy X-ray and gamma-ray flares. While Sgr A* currently shows little sign of such activity, this could change soon.

Using near-infrared observations, other astronomers have spotted a separate, compact cloud of gas amounting to just a few Earth masses spiraling towards the black hole. Located much closer to the black hole than the reservoir of material studied by Herschel in this work, it may finally be gobbled up later this year.

Spacecraft including ESA's XMM-Newton and Integral will be waiting to spot any high-energy burps as the black hole enjoys its feast.

"The center of the Milky Way is a complex region, but with these Herschel observations, we have taken an important step forward in our understanding of the vicinity of a supermassive black hole, which will ultimately help improve our picture of galaxy evolution," says Goeran Pilbratt, ESA's Herschel project scientist.

"Herschel Far-Infrared Spectroscopy of the Galactic Center. Hot Molecular Gas: Shocks versus Radiation near Sgr A*" by J. R. Goicoechea et al. is accepted for publication in Astrophysical Journal Letters, 7 May 2013; preprint: http://arxiv.org/abs/1305.1119

The study focuses on a spectral scan towards Sgr A* at wavelengths of approximately 52-671 microns taken with the PACS and SPIRE spectrometers, and is part of the PRISMAS (PRobing InterStellar Molecules with Absorption line Studies) and SPECHIS (SPIRE Spectral Line Surveys of HIFI-GT-KP Sources) Herschel Guaranteed-Time Programs.

Herschel is an ESA space observatory with science instruments provided by European-led Principal Investigator consortia and with important participation from NASA.