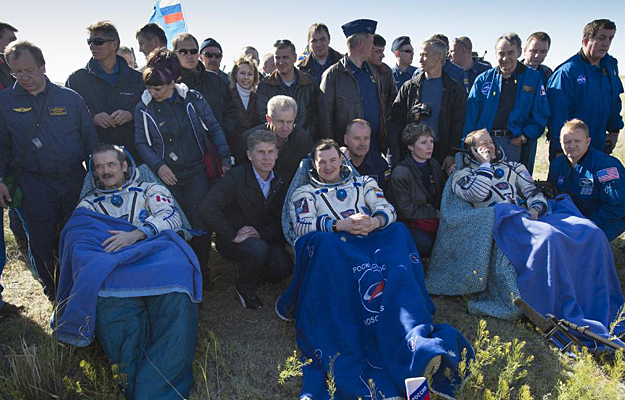 Today, Canadian Space Agency (CSA) Astronaut Chris Hadfield landed safely on the plains of Kazakhstan aboard a Russian Soyuz Capsule at 10:31 p.m. EDT. During his five-month mission aboard the International Space Station (ISS), Hadfield and the Station crew conducted over 130 science experiments, establishing a record for science conducted on the Station. In March, Hadfield achieved a historic milestone, becoming the first Canadian to command the Station.

"Over the past five months, Chris Hadfield has confirmed our country's world-renowned space expertise, with accomplishments reaching beyond his role aboard the Station," stated the Honourable Christian Paradis, Minister of Industry and Minister responsible for the Canadian Space Agency. "Our Government has always been a strong supporter of Canada's space sector and we remain committed to being a proud and active partner in the International Space Station, for the benefit of all Canadians."

Hadfield captured the world's attention, sharing his space mission through countless tweets, videos and exchanges with school groups. His engaging videos, showing daily life and work aboard the Station, and his photographs of our planet have reminded the world that space exploration is not only about looking beyond but also about learning about Earth. Hadfield also performed Canadian experiments that will help to provide better understanding of life on Earth, such as the human cardiovascular system and radiation, and technologies for medical testing in remote locations.

"Canada launched Alouette-1 in 1962. Fifty years later, Canada was given the reigns of the ISS. It is a very encouraging sign for the future," added Gilles Leclerc, CSA Acting President. "The Canadian Space Agency sought to explain and demonstrate the wonder of human spaceflight to a new generation of Canadians through this mission. Chris has spent his entire career speaking to students across Canada, and through this mission has become our space ambassador, inspiring Canada's next space generation."

Highlights from his mission include:

- Engaging students across the country every week, through video connections and amateur radio contacts, reinforcing the importance of a sound education and disciplined work;

- Announcing the winners of the Canadian Space Agency high school science contest. His spellbinding demonstration of the winning experiment on surface tension, has been viewed by millions;

- Singing, with close to a million people across Canada and around the world, mostly students, for Music Monday;

- Launching an interactive learning website on space with the National Film Board;

- Conducting over 130 science experiments; and

- Taking part in the catch and berth of SpaceX's Dragon capsule using Canadarm2.