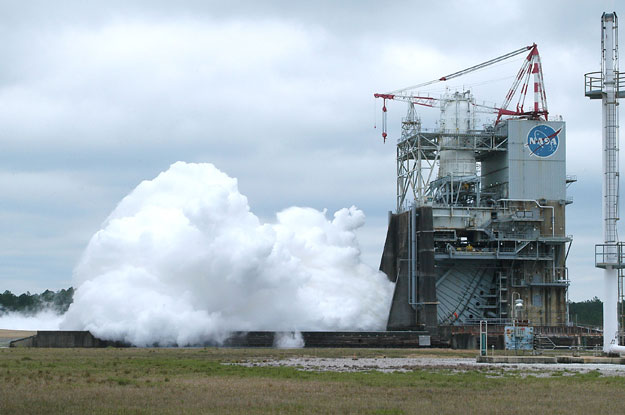 Engineers developing NASA's next-generation rocket closed one chapter of testing with the completion of a J-2X engine test series on the A-2 test stand at the agency's Stennis Space Center in Mississippi and will begin a new chapter of full motion testing on test stand A-1.

The J-2X will drive the second stage of the 143-ton (130-metric ton) heavy-lift version of the Space Launch System (SLS). The rocket will provide an entirely new capability for human exploration and send humans in NASA's Orion spacecraft into deep space.

J-2X engine 10002 was fired for the last time on the A-2 test stand at Stennis on April 17. This engine set a duration record for J-2X engine firings at Stennis' A-2 test stand on April 4 when it fired for 570 seconds, beating the previous mark set less than a month earlier on March 7, when the same engine ran for 560 seconds.

This is the second J-2X engine Stennis has test fired. Last year, test conductors put the first developmental J-2X engine, called 10001, through its paces. According to J-2X managers, both performed extremely well.

When the engine is eventually used in space, it will need to be able to move to help steer the rocket.

"The A-1 is designed to allow us to gimbal, or pivot, the J-2X during a live firing and test the range of motion for the engine's flexible parts," said Gary Benton, manager of the J-2X test project at Stennis. "This type of testing hasn't been performed since the space shuttle main engines were tested on the stand."

"While we will get valuable data on the engine from the firing and gimbaling of the J-2X, we're also re-testing the function of the A-1 stand," said Mike Kynard, manager of the SLS Liquid Engines Office at NASA's Marshall Space Flight Center in Huntsville, Ala., where the SLS Program is managed. "Using A-1 to work on the J-2X gives us a great opportunity to ensure the stand will be capable and ready to test the RS-25s."

The March 7 test, which set the short-lived duration record, was remarkable for another reason in that it marked the first time a 3-D printed part was hot-fire tested on a NASA engine system.

"This demonstrates affordable manufacturing in a revolutionary way," Kynard said. "The maintenance port cover built with Selective Laser Melting cost only 35 percent of the cost to make the same part using traditional methods. It performed well enough that we have started building other rocket engine parts using this advanced process, which takes days instead of months. It is a significant savings and one that we'll take advantage of when we build engine parts in the future."

The SLS will first launch during Exploration Mission-1 in 2017, a flight test that will send an uncrewed Orion spacecraft around the moon.

For information about Stennis, visit: http://www.nasa.gov/centers/stennis.