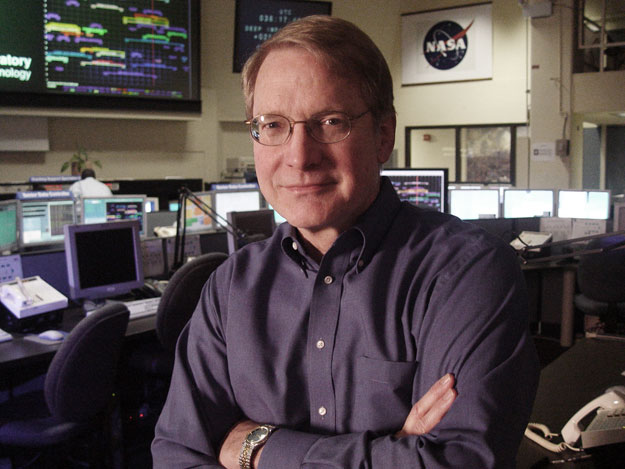 For his work making the solar system's nomads of the night sky -- near-Earth objects, asteroids and comets -- tangible and compelling for millions of people, Donald K. Yeomans, the manager of NASA's Near-Earth Object Program Office at the Jet Propulsion Laboratory in Pasadena, has received the 2013 Carl Sagan Medal from the American Astronomical Society (AAS).

The Sagan Medal recognizes a planetary scientist for excellence in public communication. Yeomans will receive the medal during the AAS Division for Planetary Sciences annual meeting, Oct. 6 to 11 in Denver.

"When I began doing this, asteroids were considered little more than vermin of the solar system, irritants that occasionally got in the way of astronomers taking pictures of some distant galaxy," said Yeomans. "While times certainly have changed, two things about near-Earth objects remain the same. We need to find them before they find us and tell everybody about them as efficiently and as clearly as possible."

The Near-Earth Objects Program Office at JPL, along with the Minor Planet Center, helps coordinate the search for, and tracking of, asteroids and comets passing into Earth's neighborhood, to identify possible hazards to Earth.

The Sagan Medal citation by the American Astronomical Society's Division of Planetary Sciences' reads: "For more than two decades, Don Yeomans has been the "go to" person whenever the media seek a planetary scientist to illuminate the scientific middle ground between the hype and the ho-hum... his calm demeanor and scientific rigor have helped to dampen doomsday hysteria and sound the all-clear on more serious potential risks (e.g. Apophis) when improved observations warrant. And in every case he takes the opportunity to educate the public on the real long-term risks and potential benefits of Near Earth Objects."

Yeomans was born and raised in Rochester, N.Y., and now lives in Glendale, Calif. He graduated from Middlebury College, Vt., with a bachelor's degree in mathematics and earned a doctorate in astronomy from the University of Maryland, College Park. He has worked at JPL since 1976. In addition to managing NASA's Near-Earth Objects Program Office, Yeomans is supervisor for JPL's Solar System Dynamics Group. He was a science team member for NASA's Deep Impact/EPOXI mission, which deployed an impactor that was "run over" by comet Tempel 1 in 2005 and flew close to comet Hartley 2 in 2010. He was also the U.S. project scientist for the Japanese-led Hayabusa mission that returned a sample from near-Earth object Itokawa in 2010, and a team chief for the Near-Earth Asteroid Rendezvous mission that orbited, then landed on the asteroid Eros in 2001. The first images of the return of comet Halley in 1982 were also obtained based on Yeomans' predictions.

Yeomans has written about asteroids, comets and near-Earth objects in more than 160 professional publications, and numerous writings in the popular press. He has authored five books, most recently his 2013 work, "Near-Earth Objects: Finding Them Before They Find Us".

NASA's Near-Earth Object Observations Program manages and funds the search for, study of and monitoring of asteroids and comets whose orbits periodically bring them close to Earth. JPL manages the Near-Earth Object Program Office for NASA's Science Mission Directorate in Washington. The Minor Planet Center is funded by NASA and hosted by the Smithsonian Astrophysical Observatory in Cambridge, Mass. JPL is a division of the California Institute of Technology in Pasadena.