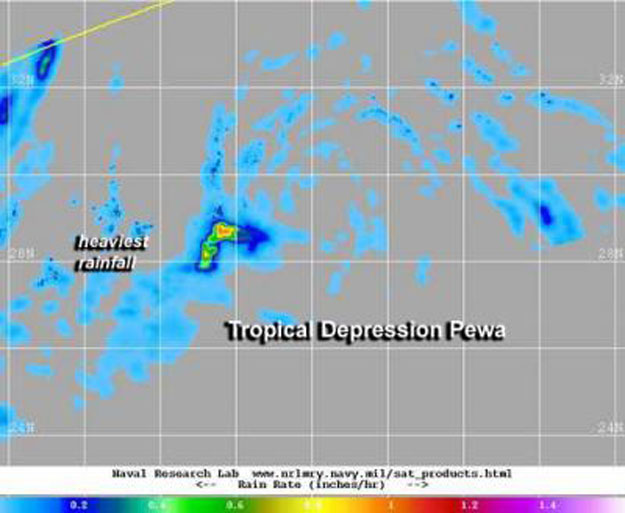 Tropical Depression Pewa dissipated in the northwestern Pacific Ocean early on Aug. 26, 2013. NASA satellite data on the previous day showed that rainfall had greatly diminished in the depression.

On Aug. 25, Tropical Depression Pewa's circulation had expanded and the storm weakened. Forecasters at the Joint Typhoon Warning Center expected Pewa would dissipate over the next day. Earlier thoughts were that Pewa might hang together and become an extra-tropical storm, but it appears that the life is leaving the storm.

NASA's TRMM/Tropical Rainfall Measuring Mission satellite captured Pewa's waning rainfall on Aug. 25 at 14:17 UTC/10:17 a.m. EDT. TRMM's precipitation radar data showed moderate rainfall in a small area in the southwestern quadrant of the depression. At that time, most of the system either had light rain or is rain-free. By Aug. 26, Pewa passed in the Pacific.