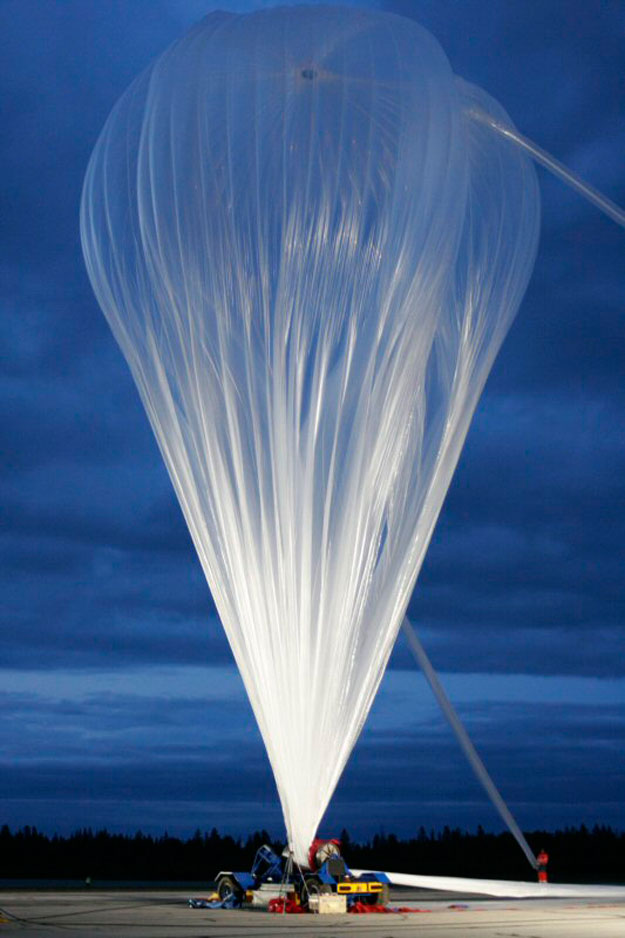 September 11, 2013, inflation of the first stratospheric balloon to be launched from the base in Timmins, Ontario.

The Canadian Space Agency (CSA) and the French space agency, the Centre national d'études spatiales (CNES), have successfully completed their maiden stratospheric research balloon flight from Timmins, Ontario. This flight was the first to take place under a France-Canada collaboration agreement signed on September 30, 2012.

These remotely controlled atmospheric balloons can carry up to 1.75 tons of equipment into the stratosphere, require no engine and no fuel, are fully recoverable, and can reach altitudes of up to 42 km. They can be used to collect a wide variety of critical data on the Earth's environment and atmosphere, or look outwards into the Universe for astronomy research.

"This collaborative effort between France and Canada will provide a new, inexpensive platform for scientists to test technologies in a near-space environment," said the Honourable James Moore, Minister of Industry, and responsible for the CSA. "The stratospheric balloon project allows for faster launch capability and is an environmentally responsible tool for scientific research and technology development"

"This historic launch marks the beginning of a new opportunity for Canada," said CSA President Walter Natynczyk. "Thanks to the modest investment in these balloon campaigns, and our strong collaboration with the French space agency and the City of Timmins, the Canadian engineering and scientific communities will now gain valuable access to frequent flight opportunities starting in 2014. The CSA looks forward to receiving payload proposals from Canadian research scientists and engineers for future stratospheric balloon missions."

Today's flight, the first of two, was devoted to testing the CNES' most recent stratospheric balloon technology. The ten-hour journey was completed on schedule at 6:40 am this morning.

The second test flight is scheduled during the following days. For this launch, the CNES will use its largest stratospheric balloon, which is nearly 324 metres in length-equal to the height of the Eiffel Tower.

As part of these stratospheric balloon launches, the Canadian firm Xiphos (Montreal, QC) will be testing a payload consisting of a new miniaturized data-processing technology. Xiphos hopes to certify this technology for use in future space and sub-orbital missions. Canadian firm DPL Science Inc. (Montreal, QC) will also participate in these qualification flights by testing its latest technology consisting of an integrated generic-power subsystem that could greatly reduce the mass and complexity of a future unit to be mounted on board the balloon and spacecraft.