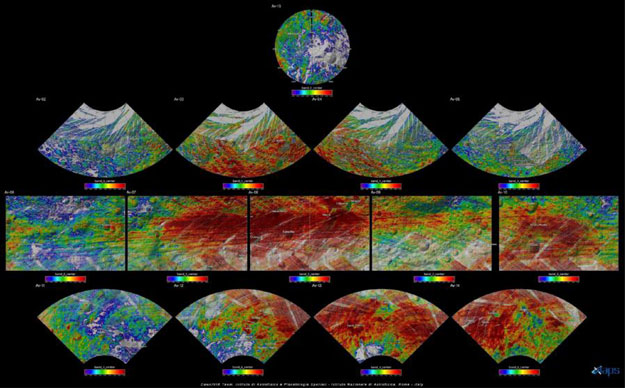 An atlas of the asteroid, Vesta, created from images taken during the Dawn Mission’s Low Altitude Mapping Orbit (LAMO), is now accessible for the public to explore online. The set of maps has been created from mosaics of 10 000 images from Dawn’s framing camera (FC) instrument, taken at an average altitude of about 210 kilometres. The maps are mostly at a scale of 1:200 0000 (1 centimetre = 2 kilometres), about that of regional road touring maps. The atlas will be presented by Dr Thomas Roatsch on Wednesday 11 September at the at the European Planetary Science Congress (EPSC) 2013 in London.

“Creating the atlas has been a painstaking task – each map sheet of this series has used about 400 images,’ said Dr Roatsch. ‘The atlas shows how extreme the terrain is on such a small body as Vesta. In the south pole projection alone, the Severina crater contours reach a depth of 18 kilometres; just over a hundred kilometres away the mountain peak towers 7 kilometres above the ellipsoid reference level.”

The atlas comprises 29 maps using three different projections: Mercator for equatorial regions, Lambert conical projections for mid-latitudes and a stereographic projection for the Rheasilvia basin at Vesta’s south pole. Because the LAMO mapping phase took place during northern winter on Vesta, when the north pole was in complete darkness, the thirtieth tile of Vesta’s north pole is blank. A few gaps in the LAMO coverage were filled with lower resolution images taken during the High Altitude Mapping Orbit (HAMO) at 700 kilometres above the surface of Vesta.

As well as the high-resolution map tiles, each of the downloadable files for the atlas also includes an index map, a perspective view and a colour-coded and shaded relief map. Contour lines have been derived from a digital terrain model of Vesta and are based on a flattened ellipsoid 285 kilometres by 229 kilometres at its widest point.

For the purposes of the Atlas, Vesta’s prime meridian (zero degrees longitude) passes close to the tiny crater Claudia, measuring approximately 620 m in diameter, at 1.66°S and 356°E. All positions used by the Dawn project are in that Claudia system. The names of all geological features relate to Roman Vestals, famous Roman women, cities in which the cult of Vesta is known or festivals in which the Vestals participated. The nomenclature was proposed by the Dawn team and approved by the International Astronomical Union.

In the same session at EPSC 2013, Dr Alessandro Frigeri will present the first complete version of the Vesta Atlas of Spectral Parameters, from which information on the mineralogy of the surface of the asteroid can be inferred. The spectral Atlas represents a composite of all the observations made by the Visible and Infrared Mapping Spectrometer (VIR), creating a total of 84 digital maps with the same projection scheme used for the image atlas.

“The two Atlases are complementary,” said Frigeri. “By matching the spectral data with the images from the Framing Camera Atlas of Vesta, we can correlate the mineralogy to the main topographical features on the asteroid.”

An atlas of the asteroid, Vesta, created from mosaics of 10 000 images from Dawn’s framing camera (FC) instrument, taken during the Dawn Mission’s Low Altitude Mapping Orbit (LAMO) an altitude of around 210 kilometres. The maps are mostly at a scale of 1:200 0000 (1 centimetre = 2 kilometres),at: http://dawn_gis.dlr.de/atlas_dir/lamo/index.html#aricia

The Dawn spacecraft orbited Vesta for more than a year, departing in September 2012. Dawn is now on its way to the dwarf planet Ceres, and will arrive in early 2015.

The Dawn mission to Vesta and Ceres is managed by NASA's Jet Propulsion Laboratory, a division of the California Institute of Technology in Pasadena, for NASA's Science Mission Directorate, Washington. The University of California, Los Angeles, is responsible for overall Dawn mission science. The Dawn framing cameras were developed and built under the leadership of the Max Planck Institute for Solar System Research, Katlenburg-Lindau, Germany, with significant contributions by DLR German Aerospace Center, Institute of Planetary Research, Berlin, and in coordination with the Institute of Computer and Communication Network Engineering, Braunschweig. The framing camera project is funded by the Max Planck Society, DLR and NASA.