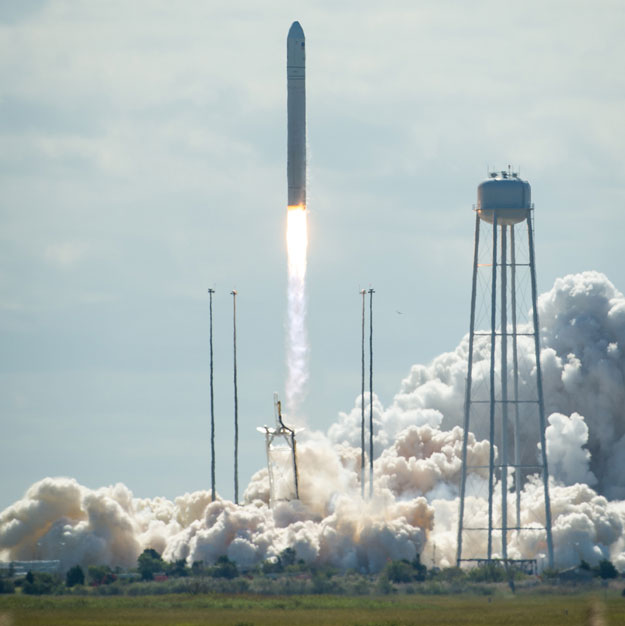 This is the first time a spacecraft launched from Virginia is blazing a trail toward the International Space Station, heralding a new U.S. capability to resupply the orbiting laboratory.

Traveling 17,500 mph in Earth's orbit, Cygnus is on its way to rendezvous with the space station Sunday, Sept. 22. The spacecraft will deliver about 1,300 pounds (589 kilograms) of cargo, including food and clothing, to the Expedition 37 crew, who will grapple and attach the capsule using the station's robotic arm.

"Today marks a milestone in our new era of exploration as we expand the capability for making cargo launches to the International Space Station from American shores," said NASA Administrator Charles Bolden. "Orbital's extraordinary efforts are helping us fulfill the promise of American innovation to maintain our nation's leadership in space."

Orbital is building and testing its Antares rocket and Cygnus spacecraft under NASA’s Commercial Orbital Transportation Services (COTS) Program. The successful completion of the COTS demonstration mission will pave the way for Orbital to conduct eight planned cargo resupply flights to the space station through NASA’s $1.9 billion Commercial Resupply Services contract with the company.

"Today’s launch is the culmination of more than five years’ work between the NASA and Orbital teams," said Alan Lindenmoyer, NASA’s program manager for commercial crew and cargo. "Everyone involved should be extremely proud, and we are looking forward to a successful series of checkouts between now and when Cygnus reaches the space station this weekend."

Over the next several days, Cygnus will perform a series of maneuvers to test and prove its systems, ensuring it can safely enter the so-called "keep-out sphere" of the space station, a 656-foot (200-meter) radius surrounding the complex.

A joint news conference will take place at NASA's Johnson Space Center in Houston and at Orbital's Headquarters at 45101 Warp Drive, in Dulles, Va., at about 1 p.m. EDT, after Cygnus operations are complete. The briefing will be carried live on NASA TV and the agency's website. Media may participate by telephone by calling the Johnson newsroom at 218-483-5111 no later than 15 minutes prior to the start of the briefing. Media interested in attending the briefing in Houston should contact Johnson's newsroom no later than 5 p.m. EDT Friday, Sept. 20. Media with U.S. citizenship who want to attend the briefing at Orbital should contact Barron Beneski at 703-406-5528 or public.relations@orbital.com by noon Friday, Sept. 20. The registration deadline for non-U.S. citizens has passed.

NASA initiatives such as COTS are helping to develop a robust U.S. commercial space transportation industry with the goal of achieving safe, reliable and cost-effective transportation to and from the International Space Station and low-Earth orbit. NASA’s Commercial Crew Program also is working with commercial space partners to develop capabilities to launch U.S. astronauts from American soil in the next few years.

The International Space Station is a convergence of science, technology and human innovation that demonstrates new technologies and makes research breakthroughs not possible on Earth. The space station has had continuous human occupation since November 2000. In that time it has been visited by more than 200 people and a variety of international and commercial spacecraft. The space station remains the springboard to NASA's next great leap in exploration, including future missions to an asteroid and Mars.

For more information about the Orbital demonstration mission, visit:
http://www.nasa.gov/orbital

For more information about the International Space Station, visit:
http://www.nasa.gov/station