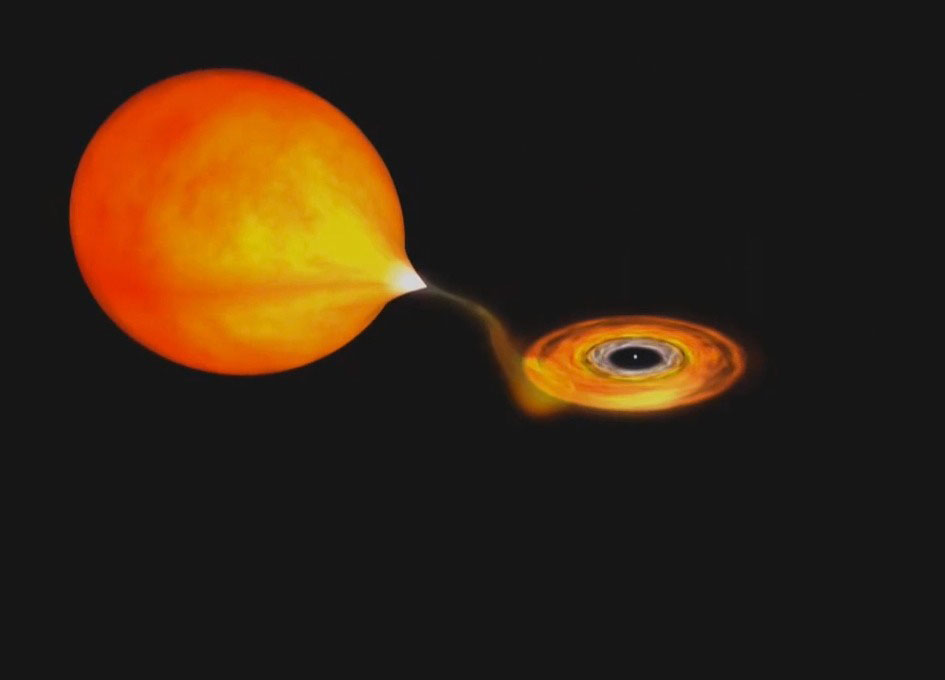 Astronomers have uncovered the strange case of a neutron star with the peculiar ability to transform from a radio pulsar into an X-ray pulsar and back again. This star's capricious behavior appears to be fueled by a nearby companion star and may give new insights into the birth of millisecond pulsars.

"What we're seeing is a star that is the cosmic equivalent of 'Dr. Jekyll and Mr. Hyde,' with the ability to change from one form to its more intense counterpart with startling speed," said Scott Ransom, an astronomer at the National Radio Astronomy Observatory (NRAO) in Charlottesville, Va. "Though we have known that X-ray binaries -- some of which are observed as X-ray pulsars -- can evolve over millions of years to become rapidly spinning radio pulsars, we were surprised to find one that seemed to swing so quickly between the two."

Neutron stars are the superdense remains of massive stars that have exploded as supernovas. This particular neutron star, dubbed IGR J18245-2452, is located about 18,000 light-years from Earth in the constellation Sagittarius in a cluster of stars known as M28. It was first identified as a millisecond radio pulsar in 2005 with the National Science Foundation's Robert C. Byrd Green Bank Telescope (GBT) and then later rediscovered as an X-ray pulsar by another team of astronomers in 2013. The two teams eventually realized they were observing the same object, even though it was behaving very differently depending on when it was observed. Additional observations and archival data from other telescopes confirmed the on-again, off-again cycle of X-ray and radio pulsations.

"Various observations of one particular star over the years and with different telescopes have revealed vastly different things -- at one time a pulsar and the other an X-ray binary," said Alessandro Papitto of the Institute of Space Sciences (Consejo Superior de Investigaciones Cientificas -- Institut d'Estudis Espacials de Catalunya) in Barcelona, Spain, and lead author of a paper published in the journal Nature. "This was particularly intriguing because radio pulses don't come from an X-ray binary and the X-ray source has to be long gone before radio signals can emerge."

The answer to this puzzle was found in the complex interplay between the neutron star and its nearby companion.

X-ray binaries, as their name implies, occur in a two-star system in which a neutron star is accompanied by a more normal, low-mass star. The smaller but considerably more massive neutron star can draw off material from its companion, forming a flattened disk of gas around the neutron star. Gradually, as this material swirls down to the surface of the neutron star, it becomes superheated and generates intense X-rays.

Astronomers believed that this process of accretion continued, mostly unabated, for millions of years. Eventually, the material would run out and the accretion would stop, along with the X-ray emission.

Without the influx of new material, the neutron star's powerful magnetic fields are able to generate beams of radio waves that sweep across space as the star rotates, giving the pulsar its characteristic lighthouse-like appearance.

Most radio pulsars rotate a few tens of times each second and -- if left to their own devices -- will slow down over many thousands of years. If the neutron star begins life as an X-ray binary, however, the matter accumulating on its surface causes the neutron star to "spin up," increasing its rate of rotation until it spins hundreds of times each second. When this accretion process stops, the result is a millisecond pulsar.

During their observations, the researchers detected outbursts of X-ray pulsations that went on for approximately one month and then abruptly stopped. Within a few days, the radio pulses once again emerged. These wild swings indicated that the material from the accretion disk was falling onto the neutron star in fits and starts, rather than in a long and constant stream as astronomers theorized.

An earlier study of another system with the GBT detected the first evidence of an accretion disk around a neutron star, which helped establish the link between low-mass X-ray binaries and pulsars.

The new data support this link but also show for the first time that the evolution process, which was thought to take perhaps millions of years, is actually more complex and can occur in episodic bursts that can last just a few days or weeks. "This not only demonstrates the evolutionary link between accretion and rotation-powered millisecond pulsars," said Ransom, "but also that some systems can swing between the two states on very short timescales."

The X-ray source was discovered by the International Gamma-Ray Astrophysics Laboratory (INTEGRAL) and follow-up X-ray observations were performed by the XMM-Newton, Swift, and Chandra satellites. Radio observations were made by the GBT, the Parkes radio telescope, the Australia Telescope Compact Array, and the Westerbork Synthesis Radio Telescope.