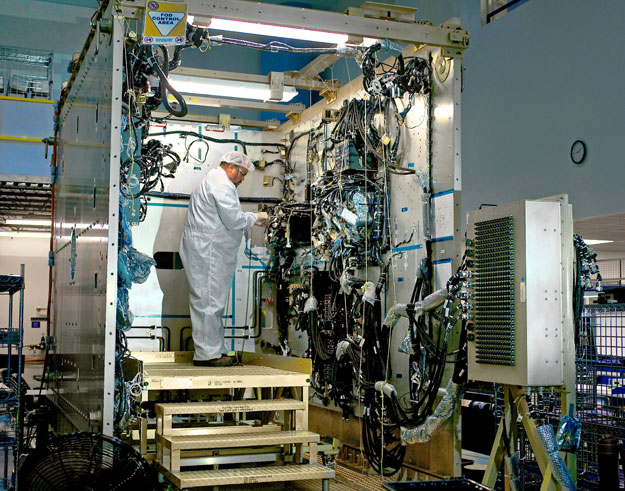 Lockheed Martin [NYSE: LMT] has powered on the system module of the GOES-R satellite for the first time. The Geostationary Operational Environmental Satellite–R series (GOES-R) is NOAA’s next geostationary weather satellite. Power-on of the spacecraft’s avionics and major electronic subsystems is a key milestone to delivery of the first satellite.

The system module of the A2100-based satellite is being built at Lockheed Martin Space System’s Newtown, Pa. facility. The system module testing will demonstrate the functionality and integration of three major electrical subsystems, Command and Data Handling, Communication, and Electrical Power. A total of 76 electronic boxes and 12 wiring harnesses were installed in preparation for this power up.

“This is one of the most significant milestones on the program to date and our team demonstrated their dedication by getting us here on-time,” said Paula Hartley, program manager for the GOES-R Series at Lockheed Martin Space Systems Company. “Even though we thoroughly test each subsystem at the box level, this is the first time that we’ve seen it working as a complex integrated system. It’s the beginning of a new satellite.”

In January 2013, NASA exercised the option for Lockheed Martin to develop two additional GOES R-series satellites, designated T & U, for NOAA bringing the total number of satellites that will be built to four.

In addition to the spacecraft, Lockheed Martin is also designing and building the Solar Ultraviolet Imager (SUVI) and the Geostationary Lighting Mapper (GLM) instruments that will each fly aboard the four spacecraft.

The NOAA Satellite and Information Service funds, manages, and will operate the GOES-R series satellites. NASA oversees the acquisition and development of the GOES-R spacecraft and instruments for NOAA. The program is co-located at NASA’s Goddard Space Flight Center in Greenbelt, Md.

Headquartered in Bethesda, Md., Lockheed Martin is a global security and aerospace company that employs about 116,000 people worldwide and is principally engaged in the research, design, development, manufacture, integration, and sustainment of advanced technology systems, products, and services. The Corporation’s net sales for 2012 were $47.2 billion.

More information about GOES-R can be found at:
· http://www.goes-r.gov/
· www.lockheedmartin.com/goesr