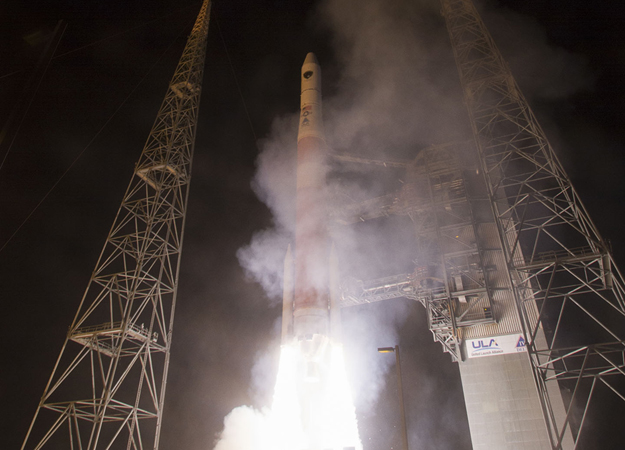 "ATK is pleased to provide an extensive selection of highly engineered products that support both the Delta IV rocket and the GPS IIF-5 satellite," said Blake Larson, president of ATK Aerospace Group. "Our affordable innovation and execution excellence continue to demonstrate ATK's leadership in the aerospace market."

The Delta IV medium-plus rocket that was used on this flight was in the 4, 2 configuration, which features two ATK 60-inch diameter Graphite Epoxy Motors (GEM-60). The 53-foot-long motors are mounted on opposing sides of the rocket, with one vectorable motor per side. The GEM-60s burn for approximately 90 seconds and provide more than 560,000 pounds of thrust to deliver the GPS IIF-5 satellite into orbit. The motors were produced at ATK's Magna, Utah, facility, and the composite cases, nose cones and aeroskirts were fabricated at ATK's Clearfield, Utah, facility. ATK has manufactured 53 GEM-60 boosters for the Delta IV launch vehicle since the initial flight in 2002.

Many other ATK components and structures also supported the Delta IV rocket:

ATK supplied nine key composite structures that are five meters in diameter and range from one to 15 meters in length: the interstage, centerbody, thermal shield, LO2 skirt, composite payload fairing, nose cap, X-panels, payload attach fitting, and payload attach fitting diaphragm. The structures are all produced using advanced hand layup, machining and inspection techniques at ATK's manufacturing facility in Iuka, Miss., with the exception of the X-panels, which are produced at ATK's facility in Clearfield, Utah.

The nozzle for the launch vehicle's RS-68 engine was designed and manufactured at ATK's Promontory, Utah, facility. ATK also designed and produced the nozzle's thermal protection material, which is capable of shielding the nozzle from the extreme heat of launch when external temperatures can exceed 4,000 degrees Fahrenheit.

For the GPS IIF-5 satellite, ATK provided a host of products and services:

ATK's Goleta, Calif., facility designed and manufactured the satellite solar arrays and a deployment boom. ATK has achieved 100 percent on-orbit success on all solar arrays and deployable systems delivered and launched to date.

ATK's Commerce, Calif., facility had responsibility for the ullage tank assembly, including the blankets, heaters, thermistors and pressurant lines. This tank is a spherical vessel constructed of titanium.

ATK is an aerospace, defense, and commercial products company with operations in 22 states, Puerto Rico, and internationally. News and information can be found on the Internet at www.atk.com, on Facebook at www.facebook.com/atk, or on Twitter @ATK.