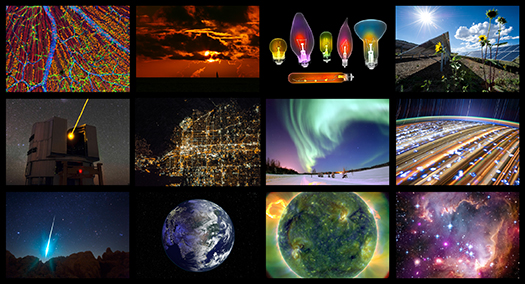 To celebrate the International Year of Light (http://www.light2015.org), a year-long initiative in 2015 endorsed by the United Nations, a new exhibit of spectacular images is being unveiled. This collection, called “Light: Beyond the Bulb,” will allow individuals and organizations around the globe to freely host their own exhibit.

“Light: Beyond the Bulb” (LBTB) is an open-source international exhibition program that showcases the incredible variety of light-based science being conducted today. Accompanied by brief and informative captions, the images in the collection include examples from across the electromagnetic spectrum, across different scientific disciplines, and across technological platforms.

This is the latest incarnation of a “public science” project being led by the same team that created the “From Earth to the universe” (FETTU) project for the International Year of Astronomy 2009, and others.

“Through the incredible work of organizers around the world, FETTU appeared in over 1,000 locations across the globe,” said Kimberly Arcand of the Chandra X-ray Center, who is one of the leads of LBTB. “We hope that many people will also be interested in hosting an exhibit that marks the wonders of light in all of its forms.”

LBTB (http://lightexhibit.org) is being made possible by a collaboration between the Chandra X-ray Center that runs science and operations for NASA’s Chandra X-ray Observatory and SPIE, the international society for optics and photonics. Additional support is being provided by the International Astronomical Union, which recognizes LBTB as one of its cornerstone projects for IYL 2015.

There are currently dozens of LBTB exhibits planned in countries from the United States to the United Kingdom to Brazil. There are many ways that interested individuals and organizations can become involved with LBTB and host or enable an exhibit. To learn more about the possibilities, visit the section of the LBTB website that describes these options: http://lightexhibit.org/howtoexhibit.html

The opening ceremonies for the International Year of Light took place at UNESCO headquarters in Paris on January 19 and 20, 2015. A version of the LBTB was on display during this event to help kick off this commemorative year.