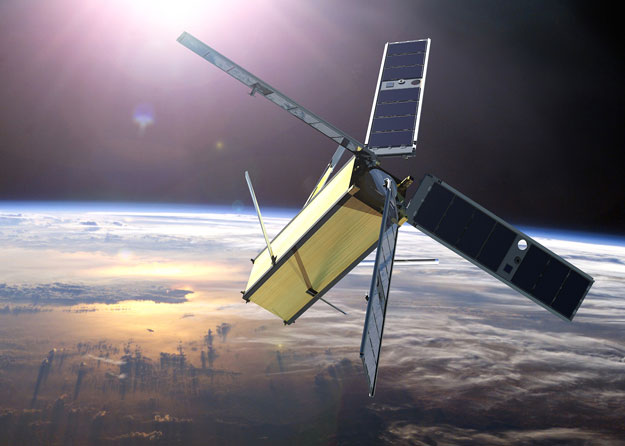 Artist’s impression of an ORS Tech CubeSat in orbit. The small satellites had all the subsystems of a standard orbiter — command and data handling, communications, navigation, power and payload — scaled to fit into a 34-by-10-by-10 centimeter (about 13-by-4-by-4 inch) package that weighed less than five kilograms (11 pounds). Credit: Johns Hopkins University Applied Physics Laboratory

After 18 months in orbit — months longer than typical for spacecraft in their class — the twin ORS Tech 1 and 2 CubeSats recently completed their final trip into Earth’s atmosphere.

The CubeSats were among 29 satellites lifted to orbit on Nov. 19, 2013, aboard a Minotaur I rocket from Wallops Flight Facility, Virginia, as part of the U.S. Air Force ORS-3 mission. The shoebox-sized satellites, part of the Multimission Bus Demonstration program at the Johns Hopkins University Applied Physics Laboratory (APL) in Laurel, Maryland, represented a new capability for the military and intelligence and science communities — a small satellite that could get to space inexpensively and be tough enough for long-term use.

When atmospheric drag caught up to the spacecraft in late March and early April, they had completed one of the longest operational periods ever for a CubeSat. While numerous CubeSats are launched each year, many function only for a few hours, and those without onboard propulsion systems typically reenter Earth’s atmosphere within a year.

The ORS CubeSats drew from five decades of APL experience in building rugged spacecraft for harsh environments near and far from Earth — as well as the Lab’s deep, unique understanding of spacecraft, aerospace engineering and applied engineering techniques. The satellites had all the subsystems of a standard orbiter — command and data handling, communications, navigation, power and payload — scaled to fit into a 34-by-10-by-10 centimeter (about 13-by-4-by-4 inch) package that weighed less than five kilograms (11 pounds).

“The long mission duration of ORS Tech 1 and 2 has been very rewarding for our team of engineers and scientists,” said Ann Darrin, program manager at APL, which built and initially operated the satellites. “Reliability was one of our considerations when we designed the spacecraft; in order to be of operational use to our sponsor the mission lifetime had to be one year.”

Following launch, the twin spacecraft went through an evaluation phase to determine the best configuration and operational scheme for meeting their payload’s objectives. The technology demonstration segment of the mission ended in June 2014, when APL handed command and control of the spacecraft and ground system to its Department of Defense customer. ORS Tech 1 became unresponsive before the operational phase, but ORS Tech 2 performed well over the 10-month operational period until the spacecraft reentered Earth’s atmosphere.

The Applied Physics Laboratory, a not-for-profit division of The Johns Hopkins University, meets critical national challenges through the innovative application of science and technology. For more information, visit www.jhuapl.edu.