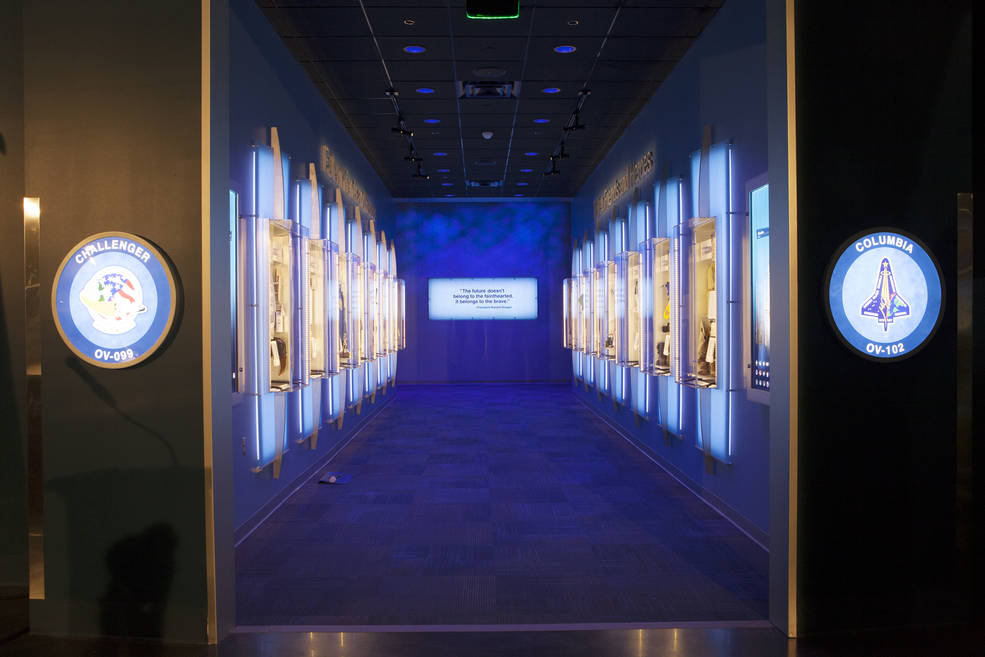 A permanent memorial, "Forever Remembered," is unveiled June 27 in the Space Shuttle Atlantis exhibit at the Kennedy Space Center Visitor Complex in Florida. NASA and astronaut families collaborated on the memorial designed to honor the crews lost on missions STS-51L and STS-107, pay tribute to shuttle vehicles Challenger and Columbia, and emphasize the importance of learning from the past. Encompassing nearly 2,000 square feet, the memorial contains the largest collection of memorabilia and personal items of both flight crews. It also includes recovered hardware from both Challenger and Columbia, never before displayed for the public. Credits: Photo credit: NASA/Kim Shiflett

NASA and the families of the crews of space shuttle missions STS-51L and STS-107 have collaborated to create a new, permanent memorial designed to honor the astronauts, pay tribute to orbiters Challenger and Columbia, and emphasize the importance of learning from the past. “Forever Remembered” opened Saturday at the Kennedy Space Center Visitor Complex in Florida, where it completes NASA’s 30-year Space Shuttle Program story told throughout the Space Shuttle Atlantis exhibit.

Encompassing nearly 2,000 square feet, the memorial contains the largest collection of personal items of both flight crews. It also includes recovered hardware from both Challenger and Columbia, never before on display for viewing by the public.

Family members were present at a small ceremony as the memorial was formally opened by NASA Administrator Charles Bolden and Kennedy Space Center Director Bob Cabana, both veteran shuttle astronauts.

“The crews of Challenger and Columbia are forever a part of a story that is ongoing,” Bolden said. “It is the story of humankind’s evolving journey into space, the unknown, and the outer-reaches of knowledge, discovery and possibility. It is a story of hope.”

The Space Shuttle Program story is full of spectacular successes. From its maiden voyage in 1981 to its final touchdown in 2011, the capable, reusable delta-winged vehicle captivated a generation. Teams of astronauts pulled off seemingly impossible feats in Earth orbit while a cast of thousands supported them from the ground.

But the shuttle story also includes the losses of 14 courageous astronauts and the nation's first two shuttles, Columbia and Challenger. The tragedies galvanized the agency to learn from these painful events, not only to safely return the shuttle fleet to flight, but to help assure the safety of future explorers.

Temperatures at Kennedy Space Center were just a few degrees above freezing on the morning of Jan. 28, 1986, as Challenger lifted off on its 10th mission, STS-51L. One minute and 13 seconds into the flight, a booster failure caused an explosion that destroyed the vehicle, resulting in the loss of the crew of seven astronauts: Commander Francis Scobee, Pilot Michael Smith, Mission Specialists Judith Resnik, Ellison Onizuka and Ronald McNair, and Payload Specialists Gregory Jarvis and Christa McAuliffe, a New Hampshire schoolteacher.

“I believe that it’s important to share this story with everyone, and not just push it aside, or try to hide it,” Cabana said. “These crews and these vehicles are part of who we are as an agency, and a nation. They tell the story of our never ending quest to explore, and our undying spirit to never give up.”

"Forever Remembered” is designed to be an emotional experience, according to NASA’s Mike Ciannilli, who has been NASA’s lead on the memorial project since it began about four years ago. At the time, Ciannilli was a NASA Test Director and Landing Recovery Director.

"Emotion is timeless," Ciannilli explained. "It's important that we don't lock this experience into a certain time, a certain place."

Visitors enter the memorial through a doorway flanked by the STS-51L and STS-107 mission patches. The orbiter and crew are remembered through individual collections lining the walls: Challenger on the left, Columbia on the right. The items were carefully chosen to share each astronaut’s passions, talents and achievements, allowing their personalities to shine through.

Items include Husband’s cowboy boots and Bible, a small aircraft Smith hand-carved for his wife, Anderson’s vintage Star Trek lunch box, and a research paper authored by Judy Resnik, displayed alongside sheet music for violin and piano. There are flight jackets, family photographs and numerous other artifacts offering a glimpse into the people behind the names on the mission patches. Many items were loaned by the families; others belong to NASA.

“The families have been unbelievably gracious, inspiring, warm and giving,” Ciannilli said. “There were times they provided comfort to me as I worked on this, and still do.”

At the end of the first hall, the warmth of the astronauts’ collections gives way to a small gallery where guests will see firsthand the toll these events took on the shuttle hardware. A section of Challenger’s fuselage displaying the American flag stands at left; on the right, the flight deck windows of Columbia are placed at eye level.

“When I look into those windows, I see John Young and Bob Crippen preparing to launch on the boldest test flight in history, the first flight of America’s space shuttle, Columbia,” Cabana said.

“I see a much younger Bob Cabana launching to space on his first command, and I see Rick and Willie and the rest of the 107 crew smiling and experiencing the wonders of space on the final flight of Columbia.”

While great care has been taken to preserve the pieces, they’re real, bearing the scars of the trauma each shuttle endured.

“Forever Remembered” concludes with a focus on the recovery and return-to-flight efforts, including the emotional toll these events had on the nation, the challenges involved in recovery, and the triumph of return to flight. A looping video shares heartfelt letters written by children as they shared their condolences and messages of hope.

After each loss, investigators spent months looking at recovered hardware, poring over data and conducting analysis to determine what had gone wrong. A second video reveals rarely seen photos and footage of this painstaking process.

The space shuttle team pulled together to fix the problems and return the program to flight each time. Any less effort would not have honored the fallen astronauts or their missions. Shuttle Atlantis, on display nearby, flew the final mission of the Space Shuttle Program, STS-135.

“The artifacts here on display are not easy to look at. Many of them are on display for the very first time,” Bolden said. “It is our hope that by making them available for the public to view, we will help remind the world, that every launch, every discovery, every measure of progress, is possible only because of the sacrifice of those we have lost.”