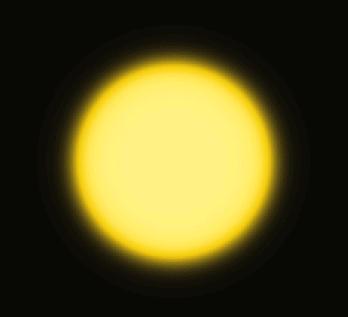 This is a simulation of a cross-section of a thread of solar material, called a filament, hovering in the sun's atmosphere. The yellow area is the thread itself, where the material is denser, and the black area is the surrounding, less dense material. The characteristic wave motion leads to complex turbulence around the edges of the yellow thread, which heats the surrounding black material. This model was created with the Aterui supercomputer at the Center for Computational Astrophysics at the National Astronomical Observatory of Japan.

Modern telescopes and satellites have helped us measure the blazing hot temperatures of the sun from afar. Mostly the temperatures follow a clear pattern: The sun produces energy by fusing hydrogen in its core, so the layers surrounding the core generally get cooler as you move outwards--with one exception. Two NASA missions have just made a significant step towards understanding why the corona--the outermost, wispy layer of the sun's atmosphere --is hundreds of times hotter than the lower photosphere, which is the sun's visible surface.

In a pair of papers in The Astrophysical Journal, published on August 10, 2015, researchers--led by Joten Okamoto of Nagoya University in Japan and Patrick Antolin of the National Astronomical Observatory of Japan--observed a long-hypothesized mechanism for coronal heating, in which magnetic waves are converted into heat energy. Past papers have suggested that magnetic waves in the sun -- Alfvénic waves - have enough energy to heat up the corona. The question has been how that energy is converted to heat.

Resonant absorption is a complicated wave process in which repeated waves add energy to the solar material, a charged gas known as plasma, the same way that a perfectly-timed repeated push on a swing can make it go higher. Resonant absorption has signatures that can be seen in material moving side to side and front to back.

To see the full range of motions, the team used observations from NASA's Interface Region Imaging Spectrograph, or IRIS, and the Japan Aerospace Exploration Agency (JAXA)/NASA's Hinode solar observatory to successfully identify signatures of the process. The researchers then correlated the signatures to material being heated to nearly corona-level temperatures. These observations told researchers that a certain type of plasma wave was being converted into a more turbulent type of motion, leading to lots of friction and electric currents, heating the solar material.

The researchers focused on a solar feature called a filament. Filaments are huge tubes of relatively cool plasma held high up in the corona by magnetic fields. Researchers developed a computer model of how the material inside filament tubes moves, then looked for signatures of these motions with sun-observing satellites.

"Through numerical simulations, we show that the observed characteristic motion matches well what is expected from resonant absorption," said Antolin.

The signatures of these motions appear in three dimensions, making them difficult to observe without the teamwork of several missions. Hinode's Solar Optical Telescope was used to make measurements of motions that appear, from our perspective, to be up-and-down or side-to-side, a perspective that scientists call plane-of-sky. The resonant absorption model relies on the fact that the plasma contained in a filament tube moves in a specific wave motion called an Alfvénic kink wave, caused by magnetic fields. Alfvénic kink waves in filaments can cause motions in the plane-of-sky, so evidence of these waves came from observations by Hinode's extremely high-resolution optical telescope.

More complicated were the line-of-sight observations--line-of-sight means motions in the third dimension, toward and away from us. The resonant absorption process can convert the Alfvénic kink wave into another Alfvénic wave motion. To see this conversion process we need to simultaneously observe motions in the plane-of-the-sky and the line-of-sight direction. This is where IRIS comes in. IRIS takes a special type of data called spectra. For each image taken by IRIS's ultraviolet telescope, it also creates a spectrum, which breaks down the light from the image into different wavelengths.

Analyzing separate wavelengths can provide scientists with additional details such as whether the material is moving toward or away from the viewer. Much like a siren moving toward you sounds different from one moving away, light waves can become stretched or compressed if their source is moving toward or away from an observer. This slight change in wavelength is known as the Doppler effect. Scientists combined their knowledge of the Doppler effect with the expected emissions from a stationary filament to deduce how the filaments were moving in the line-of-sight.

"It's the combination of high-resolution observations in all three regimes--time, spatial, and spectral--that enabled us to see these previously unresolved phenomena," said Adrian Daw, mission scientist for IRIS at NASA's Goddard Space Flight Center in Greenbelt, Maryland.

Using both the plane-of-sky observations from Hinode and line-of-sight observations from IRIS, researchers discovered the characteristic wave motions consistent with their model of this possible coronal heating mechanism. What's more, they also observed material heating up in conjunction with the wave motions, further confirming that this process is related to heating in the solar atmosphere.

"We would see the filament thread disappear from the filter that is sensitive to cool plasma and reappear in a filter for hotter plasma," said Bart De Pontieu, science lead for IRIS at Lockheed Martin Solar and Astrophysics Lab in Palo Alto, California.

In addition, comparison of the two wave motions, showed a time delay, known as a phase difference. The researchers' model predicted this phase difference, thus providing some of the strongest evidence that the team was correctly understanding their observations.

Though resonant absorption plays a key role in the complete process, it does not directly cause heating. The researchers' simulation showed that the transformed wave motions lead to turbulence around the edges of the filament tubes, which heats the surrounding plasma.

It seems that resonant absorption is an excellent candidate for the role of an energy transport mechanism--though these observations were taken in the transition region rather than the corona, researchers believe that this mechanism could be common in the corona as well.

"Now the work starts to study if this mechanism also plays a role in heating plasma to coronal temperatures," said De Pontieu.

With the launch of over a dozen missions in the past twenty years, our understanding of the sun and how it interacts with Earth and the solar system is better than at any time in human history. Heliophysics System Observatory missions are working together to unravel the coronal heating problem and the sun's other remaining mysteries.

Led by the Japan Aerospace Exploration Agency, the Hinode mission is a collaboration between the space agencies of Japan, the United States, the United Kingdom and Europe. IRIS is a NASA Small Explorer; NASA Goddard manages the Explorer Program for NASA's Science Mission Directorate in Washington. Lockheed Martin designed the IRIS observatory and manages the mission for NASA.