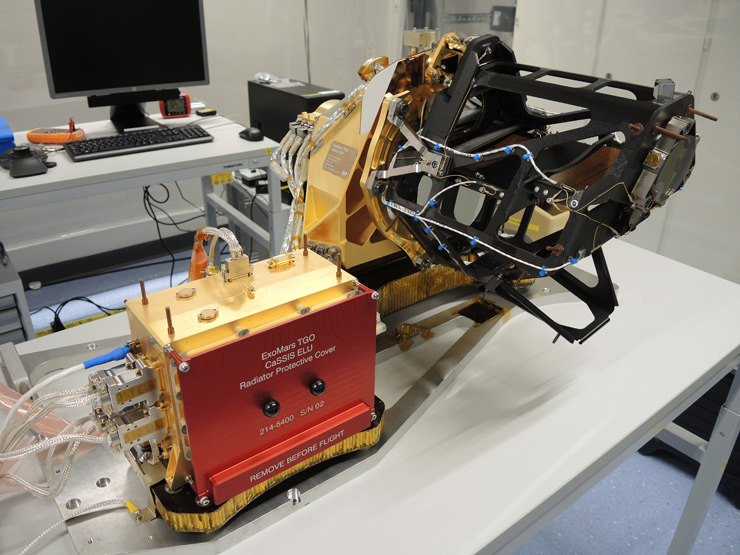 The full instrument sitting on the bench in the Uni Bern laboratory. The electronics unit (left) controls the telescope (right). The black part of the instrument is the telescope structure. The main mirror can be seen in the centre. The telescope is cantilevered off the gold coloured support structure.

A camera designed and built at the University of Bern will leave Bern on Monday, 9 November, at 6:00 in the morning for Cannes in France where it will be integrated on the European Space Agency’s ExoMars Trace Gas Orbiter (TGO) spacecraft at the premises of Thales-Alenia Space.

The TGO spacecraft is scheduled to launch from Baikonur in Kazakhstan on 12 March 2016 and will arrive at Mars in October 2016. The camera, called CaSSIS (Color and Stereo Surface Imaging System), has been developed in collaboration with the Italian Space Agency and the Space Research Center in Warsaw and with the support of Swiss (RUAG Space, Zurich), Italian, and Hungarian (SGF, Budapest) industry. CaSSIS has been designed to complement existing imaging systems orbiting Mars by providing high-resolution stereo images in full color of specific targets. It will also support other instruments on TGO looking for the sources of trace gases such as methane.

“CaSSIS is the best system we could build with the available resources,” said the leader of the science team, Nicolas Thomas of the Center of Space and Habitability (CSH) of the University of Bern. “Looking from 100 kilometers above, we would be able to precisely picture cars with this camera -- in color and stereo. One of our goals is to look at changes on Mars. We now know that surface changes on Mars are common and we need a tool to follow those changes.”

Thomas’s team was originally selected by NASA to provide a Swiss-built telescope to an American camera. “Unfortunately, our American partners had to pull out,” said Thomas. “But the ExoMars program is so important to Europe that we were asked to take over leadership and try to complete the whole system.” Project manager Ruth Ziethe from the University of Bern explained: “The challenge has been to complete the camera in time. We only had 27 months -- normally you would budget 38 months for such a complicated instrument. The Uni Bern team and our partners have worked incredibly hard to meet the launch date.”

The science team is already looking forward to the data. “Once in orbit, we will use the atmosphere of Mars to slow the spacecraft down and get to a low circular orbit, 400 km over the surface,” explained Thomas. “This process will take about a year, so we expect our best data to be obtained after mid-2017.” CaSSIS will then start looking for more evidence of liquid water on the surface and trying to find sources of trace gases that might be significant for both geology and biology.