exactEarth Ltd. (TSX: XCT) ("exactEarth" or the "Company"), announced the results of the matters voted upon at the Company's 2017 annual meeting (the "Meeting") of the shareholders of the Company (the "Shareholders") held earlier today, which included the election of directors, as described below. 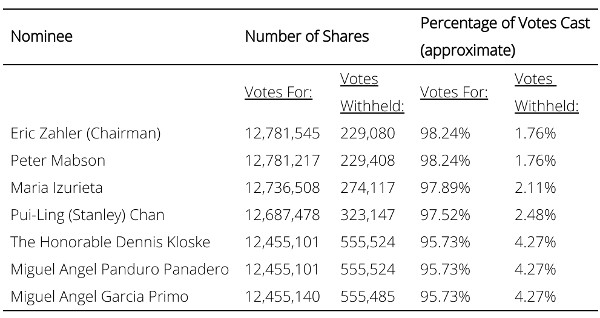 Final voting results of all other matters voted on at the Meeting will be made available on SEDAR at www.sedar.com.

exactEarth is a leading provider of global maritime vessel data for ship tracking and maritime situational awareness solutions. Since its establishment in 2009, exactEarth has pioneered a powerful new method of maritime surveillance called Satellite AIS ("S‐AIS") and has delivered to its clients a view of maritime behaviors across all regions of the world's oceans unrestricted by terrestrial limitations. exactEarth has deployed an operational data processing supply chain involving a constellation of satellites, receiving ground stations, patented decoding algorithms and advanced "big data" processing and distribution facilities. This ground‐breaking system provides a comprehensive picture of the location of AIS equipped maritime vessels throughout the world and allows exactEarth to deliver data and information services characterized by high performance, reliability, security and simplicity to large international markets. For more information, visit www.exactearth.com.