The MetOp-C meteorological satellite is getting ready for upcoming launch in order to join its siblings and further improve the quality of observations and data provided for weather forecast.

Built by Airbus, MetOp-C is the last of the first generation of EUMETSAT Polar System (EPS) series of three polar-orbiting satellites, and is planned to be launched on September 18, 2018, from European Space Center in Kourou, French Guyana, aboard a Soyuz rocket.

The MetOp programme has enhanced the accuracy of weather forecasting and allowed extending the short term forecasts by one day.

“MetOp satellites are technologically advanced and their instruments are still state-of-the-art,” said EUMETSAT Director-General Alain Ratier. “We are in the fortunate and unexpected position soon having three MetOp’s in orbit at the same time, because MetOp-A, which was launched in 2006, has exceeded its five-year design life time by far and will remain in orbit until 2022.”

“Building on the successful operation and exceptional longevity of the MetOp satellites, we are still happy to have been entrusted the preparation of MetOp-SG, the next generation of Low Earth Orbit Meteorological satellites for EUMETSAT and ESA”, said Mathilde Royer Germain, Head of Earth Observation, Navigation and Science at Airbus, during a presentation of the satellite to the press. 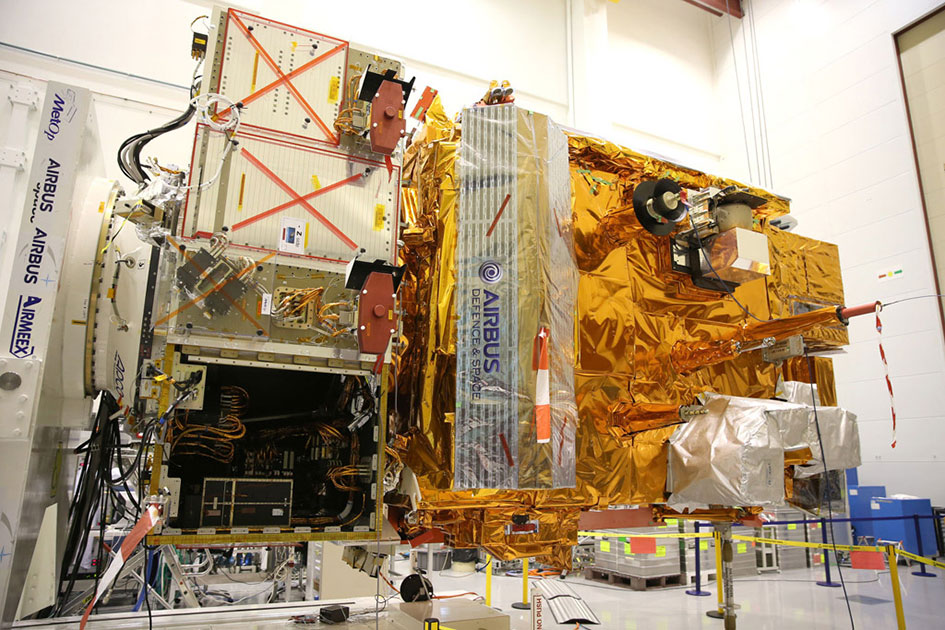 The MetOp satellites have been developed by Airbus Defence and Space for the European Space Agency (ESA) and EUMETSAT, the European Organisation for the Exploitation of Meteorological Satellites, and are part of a joint Europe-US cooperation.

Initially, the plan was for each satellite to replace its predecessor, however, the excellent performance of the first two MetOp satellites allows them to be operated simultaneously, providing the meteorological community with increased data. The forthcoming launch of MetOp-C will further improve the quality of observations and data provided for weather forecasts.

Each MetOp satellite carries a total of 12 instruments (10 for MetOp-C), making the system extremely versatile. Two of the instruments have been built by Airbus: the Microwave Humidity Sounder (MHS) and the Advanced Scatterometer (ASCAT). The MHS, built by Airbus, measures water vapour near the Earth’s surface and is a result of the collaboration with the US.

The other Airbus-built instrument, the “Advanced Scatterometer” (ASCAT) is an active radar instrument which measures wind speed and direction over the open sea. It also provides data for ice and snow coverage as well as surface moisture. ASCAT will scan two 500 kilometres wide corridors and can, therefore, provide almost global coverage within 24 hours.

MetOp also measures ocean surface winds, observes sea ice distribution and monitors the ozone layer in the stratosphere, as well as relaying meteorological measurements collected by boats, buoys and research stations. MetOp A and B also feature a receiver to relay signals sent by persons in distress.

In addition to the expected benefits on weather forecasting, MetOp-C will continue the time series of data begun by MetOp-A, and this long-term outlook is crucial for climate monitoring.

Under development at Airbus, the MetOp-SG will provide continuity and enhancement of meteorological data with improved spectral and spatial resolution compared to the measurements currently provided by the first generation of MetOp satellites. A complete range of observations will be realised using 10 different instruments, covering ultra-violet, visible, infrared and microwave spectral bands.

From 2021 onwards, MetOp-SG will further increase the benefits of accurate weather prediction based on state-of-the-art European technologies and keep contributing to socio-economic benefits worth several billion Euros for European citizens.

Airbus is a global leader in aeronautics, space and related services. In 2017 it generated revenues of € 67 billion – or € 59 billion restated for IFRS 15 - and employed a workforce of around 129,000. Airbus offers the most comprehensive range of passenger airliners from 100 to more than 600 seats. Airbus is also a European leader providing tanker, combat, transport and mission aircraft, as well as one of the world’s leading space companies. In helicopters, Airbus provides the most efficient civil and military rotorcraft solutions worldwide.