Ulysses sees the Sun begin to quiet down

Order is returning to the solar wind as the Sun begins to shake off the chaos that has characterised its behaviour during the recent peak in its 11-year activity cycle.

"Since the last part of August, Ulysses appears to be back at the edge of the prolonged high speed solar polar wind," says George Gloeckler, from the University of Maryland, who is principal investigator of the Solar Wind Ion Composition Spectrometer (SWICS) on Ulysses. The re-emergence of the high speed wind from the Sun's north polar regions, which the spacecraft is presently crossing, is a sign that the activity is subsiding and the Sun is beginning to settle down once more to a quiet time. 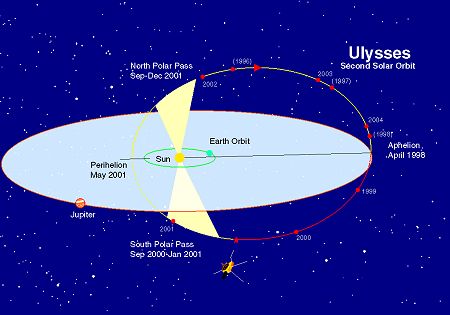 During maximum solar activity, the polarity of the Sun's magnetic field changes: the north pole takes on the polarity of the south pole and vice versa. "The magnetic polarity that accompanies this high speed solar wind stream is the new polarity," says Andre Balogh, from Imperial College, London, who is principal investigator for the magnetometer experiment on Ulysses.

The Sun is settling down at high latitudes where Ulysses is journeying now. But solar storms are still raging near the equator - some have hit the Earth very recently. "There may be turmoil yet near the equatorial region, but Ulysses has started observing conditions which will eventually prevail all around the Sun," says Balogh.

Recent images taken by SOHO, ESA's Solar and Heliospheric Observatory, also reveal that the Sun's shift to the new cycle is asymmetrical. In the SOHO image on the left, the dark area around the north pole, from which the high speed solar wind is emerging, is not yet matched by a similar region around the south pole. This should change over the coming months as the Sun's activity diminishes.

The last time Ulysses observed quiet conditions over the entire Sun was during the spacecraft's first six-year solar polar orbit when the Sun was at or near solar minimum. Then, Ulysses discovered that the boundary between high speed wind streaming away from the poles, and low speed wind emanating from lower latitudes, is quite distinct. Last year, when the Sun's activity peaked, Ulysses flew above the Sun's south pole for the second time and found a solar wind of slow or intermediate speed, just as it had seen at lower latitudes during the build up to maximum.

The intrepid spacecraft will continue to make observations for at least the next two years as the Sun's activity subsides towards the next minimum. Once Ulysses has completed its current north polar passage, it will embark once again on the long leg of its circuit out towards Jupiter's orbit.